It's down to the final four TONIGHT on part 1 of the #DWTS' 2 night finale event! pic.twitter.com/1gxA4ITn0o

Tonight, the final four contestants battled it out on Dancing With the Stars for a chance at the mirrorball trophy, but unfortunately, James Maslow was eliminated. Read on for the Top 10 Highlights of the night and to see some of the best performances. 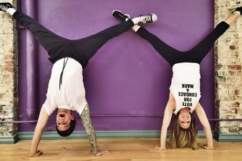 ‘DWTS’ Mark Ballas Badly Injured During Finale Rehearsals – Will He Be Able to Compete?

Mark Ballas was hospitalized for a serious injury to his shoulder during rehearsals this week and his arm was in a sling at the beginning of the show. Nevertheless, Ballas sucked it up and performed as if nothing was wrong. It was incredible.

Peta and James danced an extremely sensual tango to Miley Cyrus’ song “Adore You” and they used the actual song, rather than having the band sing. What was most exciting about the routine was the couple’s kiss in the middle. It’s what viewers have been waiting for all season … and it earned them a 29 out of 30.

When getting interviewed after their performance, a slow-motion shot of them kissing was re-played for the pleasure of the fans. 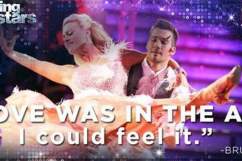 The Top 5 Reasons James Maslow & Peta Murgatroyd Should Be Dating

3. Meryl Wants to Win the Competition for Maks

Meryl and Maks performed an amazing Argentine Tango full of lifts and gorgeous movements from Meryl. During rehearsals, Maks revealed to Meryl that he’s tried so many times to win and failed. Upon hearing this, Meryl told the cameras that she most wants to win this competition for Maks.

Their first dance was impeccable and the judges were truly impressed, giving them a perfect score.

4. Candace Cameron Bure Messes Up in her First Dance

During her routine with partner Mark Ballas, Candace had much more fluidity than usual, but she made a few mistakes during her quickstep dance. Somehow, her mistakes weren’t mentioned by the judges, but the couple received a 27 out of 30. Their second dance was incredible, but only received a 24 out of 30. Candace’s daughter gave a shocked expression and had tears upon hearing her mother’s score.

5. Amy Purdy’s Back Goes Into Spasm

Last week, Amy Purdy was suffering from painful back problems and this week, the spasms returned. Nonetheless, Purdy fought through the pain to deliver a vivacious salsa routine. The couple received a perfect score of 30 out of 30 for their first routine, tying with Meryl and Maks for the lead in round 1.

If you’re a Dererk Hough fan, click here to have a look at the sexy, shirtless magnets that Amazon is selling of him.

Click the “Next Page” button below to see more of the night’s amazing performances.