Let’s look into the lives of the possible newest couple in young Hollywood.

1. They Were Spotted Frolicking in D.C

They were there for the White House Correspondents’ Dinner.

The annual event took place on May 3, at the Washington Hilton.
The two were active on Twitter during the weekend:

Boy, after being in Washington I feel like I need to take a shower. Time to get back to a much more grounded city. Hollywood, here I come.

Obama could have his own stand up show http://t.co/KvlLdxC9Kn

In January, during an interview with Real Sway, shown above, she was asked which celebs she would date.

Besides admitting she would go out with Drake and Justin Bieber, she got very excited about the prospect of Kendrick Lamar. “Yes, I would definitely go on a date with him,” she said.

If you want to upset @PrettyLilLizer talk about Emile Hirsch's baby pic.twitter.com/SEgAvsjs5U

In November of 2013, the actor welcomed son Valor with a Florida woman who has yet to be named.

An insider told the Daily News:

He is doing the right thing and will be taking care of her and his baby financially.

According to E News, the couple “met at an Oscar after party this year and had a short fling.”

4. They Both Attended the Creative Coalitions Gala Benefit Dinner

Held on May 2, the gala, according to it’s website, “follows a day of advocacy on Capitol Hill in support of the arts.”

The event’s site also listed all the famous attendees:

WHAT: The Creative Coalition’s Celebration of the Arts

5. Robb Got Props for Her Fashion Choice

Perez Hilton mentioned the black dress she donned for the Correspondents’ Dinner:

Sometimes all black can be totally boring, but the honeycomb pattern on her sleeves and dress bottom make the dress truly sparkle! 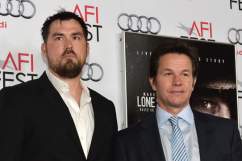