Now that it’s been confirmed that HBO’s hit show Game of Thrones has been renewed for seasons 5 and 6, it’s important to become familiarized with the book series the show is based on.

The series, A Song of Ice and Fire, was, and is still, being written by George R.R. Martin and began with the first book’s publication in 1996. Book 6, The Winds of Winter, is set to be released by the end of 2014.

Here is a Game of Thrones viewer’s guide to the books:

A Game of Thrones begins with the King of Westeros, Robert Baratheon, coming up north to Winterfell to ask the lord of Winterfell, his friend, Eddard (Ned) Stark, to become his chief advisor, called the Hand of the King. Ned travels to the capital, King’s Landing, taking his two daughters, Sansa and Arya, with him in hopes that they will enter into society.

Once in the capital, Ned begins investigating the death of his predecessor, Lord Jon Arryn, who he believes was murdered. He soon uncovers a vast conspiracy concerning the king’s children. Ned believes that the King’s children, including the heir to the throne, are actually the offspring of the Queen, Cersei Lannister, and her twin brother, Jamie Lannister, who serves as the head of the King’s bodyguards.

After King Robert dies under mysterious circumstances in a hunting accident, Ned attempts to come forward with his suspicions, to keep an illegitimate heir off the throne. He is called a traitor and ultimately executed. His younger daughter Arya escapes out of the city, and his eldest daughter Sansa is kept in King’s Landing to become the bride of the new king, a cruel and vicious teenager named Joffrey.

Meanwhile, across the Narrow Sea, Daenerys Targaryen, the daughter of the former king who was ousted by Robert Baratheon, still hopes to regain the throne of Westeros. To further her goals, she marries a Dothraki khal, the leader of a large nation of nomadic warriors. Their relationship becomes very loving, in time, and Daenerys discovers she’s pregnant just before her husband dies.

At his funeral, she discovers that she cannot be burned by fire, and three dragons eggs, given to her at her wedding, hatch. Far north of there, Ned Stark’s illegitimate son, Jon Snow, has taken an oath to defend the Wall, a large fortification that protects Westeros from the barbaric and magical foes to the north. He gains favor among the men after he kills a frozen body that came back from the dead and attacked the commander.


Below you can watch the trailer for the HBO season corresponding with this book:

The second book focuses on the “War of the Five Kings.” Young Joffrey is still on the throne of Westeros, but a slew of new challengers crop up. Both of the former king Robert Baratheon’s brothers, Stannis the older one, and Renly the younger one, raise armies to take the throne for themselves.

Further toward the north, Balon Greyjoy, lord of the Iron Islands, has taken the coming war as an excuse to claim as much of the mainland as he can. The final would-be king is Robb Stark, who, seeking vengeance for his father’s unjust beheading, declares himself lord of the north and starts an uprising.

Renly Baratheon is the first of the would-be five kings to die after his brother Stannis helps Melisandre, aka the Red Woman, a religious occultist with magical powers, give birth to a shadow assassin that kills Renly.

With Rob Stark fighting in the war, his former best friend Theon Greyjoy attacks and takes Stark’s home city of Winterfell, causing the two youngest Starks, Rickon and Bran, to flee. Arya Stark, fleeing King’s Landing after her father’s execution, is also in transit with a hidden identity. She poses as a young boy heading north to the Wall when she is captured by her family’s enemies, the Lannisters. She is eventually able to escape with the help of a faceless assassin who invites her to train with his order in Braavos. She declines but is given a coin that would allow her to travel to Braavos.

Meanwhile, a giant battle is brewing in Blackwater Bay near King’s Landing. Stannis’ giant fleet of ships is ready to take the city, but they are thwarted by the quick thinking of Tyrion Lannister, who uses flammable liquid called wildfire to destroy the ships.

Sansa Stark, still in the capital awaiting her impending marriage to the increasingly monstrous king, is suddenly put aside as Joffrey becomes betrothed to Margaery Tyrell, the daughter of a fierce ally during the Battle of Blackwater.

Up in the far north, Jon Snow has gone undercover with a wildling army, finally united after centuries under the rule of a wild king. In the east, Daenerys Targaryen has crossed a giant desert with her band of warriors and her young dragons. After power warlocks form a nearby city try to steal her dragons, they burn down their tower.

Below you can watch the trailer for the HBO season corresponding with this book:

The War of the Five Kings is winding down, but Robb Stark and his army to the north are still causing massive problems for the crown. But, after Robb Stark betrays an ally by marrying a woman he loves and not the lord’s daughter, he turns on them by conspiring with the Lannisters.

Under the guise of making amends by marrying Robb’s uncle to the daughter, the Starks attend the “Red Wedding.” At the wedding the musicians use crossbows to fire in the crowd. Robb Stark and his mother are both killed. Arya, who was outside of the castle ready to be reunited with her family after a being separated for ages, is forced to flee when she sees Stark soldiers being butchered. After a fight with men on the road, Arya leaves her wounded travel companion, Sandor Clegane aka The Hound, and boards a ship to Braavos.

In King’s Landing, Sansa Stark, no longer in line to marry King Joffrey, is forced to marry Tyrion Lanniser, the king’s uncle. At the wedding between King Joffrey and Margaery Tyrell, the king is poisoned and dies in what is known as the “Purple Wedding.” Tyrion is accused, and after an unfair trial, and trial by combat, it takes his brother Jaime to release him before he can finally go free. Before he goes, however, he kills his former lover and his father when he discovers his first wife was not a hired prostitute as his father had suggested.

Up at the Wall, Jon Snow has finally abandoned his undercover role with the wildlings and returns to the wall, ready to prepare the men for the impending invasion. As the attack is under way and it seems the Night’s Watch is doomed, Stannis Baratheon, one of the last contenders of the throne of Westeros, comes to their rescue. Jon is named the commander of the Night’s Watch. Far the in east, Daenerys Targarean is amassing her army of followers by traveling from city to city liberating slaves.

Below you can watch the trailer for the HBO season corresponding with this book:

With the death of Tywin Lannister and Westeros deeply in debt, large political shakeups are needed to keep the nation from chaos. Cersei Lannister appoints her uncle, Kevan Lannister, as the new hand of the king. She also appoints a new strategic small counsel and re-establishes a militant religious order.

Cersei also sends a large army to undertake the dangerous task of retaking Dragonstone, the island where Stannis Baratheon has made his stronghold. Jaime is also dealing with a siege of the Stark-supporting holdout city of Riverrun. Rob Stark’s great uncle, Brynden Tully, is spirited away before the Lannisters can take him. His nephew, Edmure, who married a Frey during the Red Wedding, is taken captive for his uncle’s escape. This is when snow begins to fall at Riverrun, and people now know that winter has begun.

Brienne, Jaimie’s former friend, tasked with finding Sansa Stark and keeping her safe, is now captured by the Brotherhood Without Banners, a militant band with allegiance to no family or nation. They are ruled by Lady Stoneheart, the reanimated corpse of Catelyn Stark, whose body washed up on the side of a river after she was killed at the Red Wedding. Brienne is hanged for her inability to keep the daughters safe; she shouts out one unknown word as she hangs.

Samwell Tarly, a member of the Night’s Watch, is dispatched by Jon Snow to do research about the mysterious white walkers that have emerged from the north and continue to travel south. While he is there he begins to hear rumors about Daenerys Targaryen and her dragons. Arya Stark, meanwhile, has begun training as a faceless assassin in Braavos. She assumes the identity of the “Cat of the Canals” and loses most, but not all, of her previous identity.

An alliance is formed between the Night’s Watch and their savior, Stannis Baratheon, who means to be the king of the north and usurp the Lannister-backed Boltons. Stannis attacks Ramsay Bolton at Winterfell, but Jon Snow receives a letter saying he has been defeated.

Across the Narrow Sea, Tyrion has fled Westeros and goes through a number of diversions, including being kidnapped and sold into slavery, in an attempt to offer his services to Daenerys Tagaryen. Daenerys is having trouble being both a strong and just leader, a fact made more clear by the arrival of a plague in Mareen. The book ends with her being flown away by a dragon and learning to train it, and through this process, herself as well. It ends with Daenerys reconnecting with the Dothraki khalasar.

In A Dance With Dragons the reader also discovers that Brienne of Tarth is still alive and may be trying to lure Jaime Lannister to Lady Stoneheart. Varys, the spider, eventually kills Kevan Lannister, thinking it will clear the way for “Aegon,” a Targaryen believed to have been killed years ago. 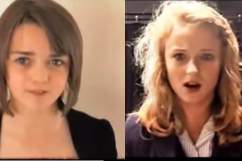