Today (May 16, 2014) is a big day for Godzilla fans worldwide! Canadian fans got to experience the star-studded premier and we’re sure it was awesome.

The hype behind the monster reboot (pun intended) for Toho’s Godzilla has finally arrived in theaters. Every trailer that’s hit the Web has led to us getting more and more excited for what’s in store. The director for the film, Gareth Edwards, definitely took his time in order to present a film that captured the proper destructive nature of Godzilla. By the looks of things, it appears that Godzilla’s American renaissance will restore him to his former glory.

Heavy is here to grace you with an exclsuive interview with Mr. Edwards as he speaks everything that encompasses his biggest film to date. He also makes sure to give hardcore fans the proper pronunciation of Godzilla’s name in Japan. 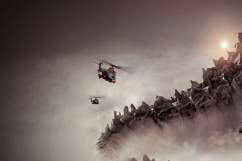