Steve Jobs and Bill Gates led the charge in the personal computer revolution, but companies outside of Silicon Valley were also working hard to compete in the emerging tech field.

Halt and Catch Fire goes inside Cardiff Electric in Dallas, a fictional company that tries to replicate the success seen at Apple and IBM.

Lee Pace stars as Joe MacMillan, an ex-IBM salesman who wants to reverse-engineer the personal computer of his former company to create an even greater product. He enlists a gifted engineer and a coding prodigy to help him in his mission.

Here’s what you should know about the new AMC series that goes beyond the technology revolution of the early 1980s. Watch the promo for Halt and Catch Fire above and read a recap of the first episode here.

MacMillan leaves his sales job at IBM back east and moves to Silicon Prairie, the latest technology sector located in Dallas, in 1983. He wants to take (or steal, as it’s implied in the video above) the technology of the PC created by his former company and use it to create a faster and cheaper computer. He brings on Cardiff computer engineer Gordon Clark (Scoot McNairy), who needs to be convinced again of his greatness after failing to launch his own line of PCs in the late-1970s.

Everything he has might go up in flames. Gordon Clark risks it all when #HaltandCatchFire premieres in 1 week. pic.twitter.com/pGkrvyxB2s

Clark explains to MacMillan that IBM doesn’t own any of the designs necessary to construct its personal computers except for the main computing chip. “Open architecture. IBM basically doesn’t own anything inside the machine,” the engineer tells MacMillan. The men won’t find the key to successfully reverse-engineering the IBM PCs on their own. A young female coder named Cameron Howe and Clark’s wife Donna, also a computer engineer, will assist in the men’s pursuits.

Pace puts the show into perspective of today’s world of innovation for Indiewire:

It’s a story about innovation, and innovation is absolutely one of the most compelling issues of our time. It moves so quickly. You listen to some of the things Elon Musk is working on, and it’s a mind-boggling way to think about the future. These are people who think like that. I think the time and the place of the show give us an opportunity to think about the concept of innovation and how to stay on the wave of what’s coming next.

To start a revolution, you have to take matters into your own hands. Anyone out there at the start of something big? pic.twitter.com/fD3LZuHXTV

MacMillan and Cardiff Electric never existed in the real world, but they will compete against real-life innovator Steve Jobs. “Joe Macmillan is absolutely aware of Steve Jobs and thinking of what he’s cooking up on the West Coast,” Pace said at the show’s SXSW premiere panel on March 9.

Jobs’ former creative partner Steve Wozniak hosted the SXSW panel and gave the show a “rare” 10 for him, according to The Next Web.

MacMillan and Clark stand in for the “unsung heroes” who stood in the shadow of the men like Jobs and Gates, according to co-creator Christopher C. Rogers in Halt and Catch Fire‘s First Look video:

This is an unexplored avenue of the tech story we’ve all become very interested in through the lens of the Steve Jobs and Bill Gates of the world. These are kind of the unsung heroes that made sure that every computer on your desk isn’t an IBM PC.

Co-creator Chris Cantwell drew inspiration from his own connection to the Dallas tech sector. His father moved his family to the Dallas area to work for a computer company in the 1980s, he told the SXSW audience:

That really stuck with me on an emotional level. That was at the emotional core for me.

The cable channel is in search of its next big hit to continue the success of past series like Breaking Bad, Mad Men and The Walking Dead. After next spring, AMC will only have The Walking Dead as a worthy competitor in the TV landscape.

The Hollywood Reporter explains the significance of Halt and Catch Fire‘s to the future of AMC.

In a world where AMC has nowhere near the track record of closest rival FX and is still playing in on field of heavyweights that include HBO, Showtime and Starz, launching another drama with gravitas (and, preferably, solid ratings) is of the utmost importance.

Critics are comparing MacMillan and the show to the other period drama, Mad Men, and its lead Don Draper, but Mackenzie Davis tells Indiewire that the Halt and Catch Fire differs both visually and aesthetically:

I read the script, and I was like, ‘Oh this is fascinating and much less about computers than people might think it would be.’ It’s about people and personalities and agendas and sex.

4. The Series Is the First TV Show to Premiere on Tumblr

AMC used the computer drama to create its own tech history when it released the first episode early on Tumblr. Halt and Catch Fire was the first TV series ever to launch on the social media site. It’s also available through cable providers’ VOD and online at AMC.com.

The show explains its title at the top of the pilot episode:

HALT AND CATCH FIRE (HCF): An early computer command that sent the machine into a race condition, forcing all instructions to complete for superiority at once. Control of the computer could not be regained.

Tumblr wasn’t the only new media AMC reached out to to help launch its new series. YouTube sensations Fine Bros. dedicated one of their “Kids React” videos to old computers from the late ’70s and early ’80s featured on the show.

The kids are flummoxed by the lack of a mouse, using two buttons to power on, and the lack of any other color than green on the screen. Things got a little better when they inserted a game into the computer from a floppy disc, with one little girl admitting, “This is better than Flappy Bird.” 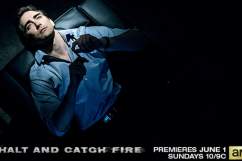 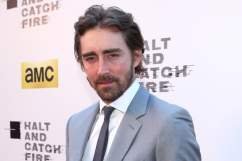 Lee Pace in ‘Halt and Catch Fire’: 5 Fast Facts You Need to Know