#DWTS live tonight, sitting next to judges. @AmyPurdyGurl blows our minds but @Meryl_Davis beyond beyond pic.twitter.com/a7fx52yUT5

Tonight on Dancing With the Stars, one of the final four was eliminated. The first couple announced as safe was Meryl and Maks, with Amy and Derek announced as the second couple going on to the finale. James Maslow and Peta Murgatroyd were the ones who got the axe, which was a surprise to the audience. 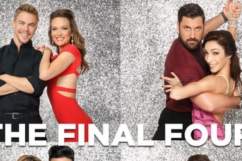