James McAvoy, aka young Professor X in X-Men:Days of Future Past, has a huge following in Hollywood, and still maintains a private life.

Watch the film’s trailer above to see the Scottish actor in the action film which hits theaters on May 23.

When McAvoy was seven, his father left him and his mother, and he thinks that experience made him a better actor.

“I think it made me right to be an actor. Having been around that emotional [stuff] sensitized me and made me aware of adult issues early on — much younger than most kids,” he said.

GQ put it best when they said that the 35-year-old is “Hollywood’s most unassuming star – a man intent on selling his work, not his soul.”

Let take a look at his career and personal life.

1. He Has a Bromance With His ‘X-Men’ Costar

Although McAvoy and Michael Fassbender both acted in Band of Brothers, they didn’t have any scenes together, so didn’t become friends on set.
However, when they got together for 2011’s X-Men: First Class, that all changed.

Before Michael and I even met, I was already willing to go with him and be open to him, because I was like, ‘This guy’s fuckin’ brilliant. Not to be too f**kin’ up your ass or anything like that, but the thing that elevated First Class for me was working with you.

Fassbender is just as equally enamored by McAvoy.

He said, “James came in to do the screen test with me…and from there, there was a respect and a friendliness between us. But then as it developed, there was more trust, and you realize that the other person’s got your back. Then the trust becomes deeper and it goes somewhere else, for sure.”

2. His Wife Played His Girlfriend

He met London-born Anne-Marie Duff on the set of the comedy Shameless, and they manage to remain private when it comes to their personal life.

One way they accomplish this is by refusing to star opposite one another. “We’ve been offered a hell of a lot of parts playing opposite each other in films and TV and we just turn them down,” the actor said.

The pair has a son, Brendan, and McAvoy keeps his family in mind when choosing roles.
“Family is really important to me and when a role comes along, you have to weigh up whether it’s worth going overseas for,” he told the Express.

3. He Has a Library Sex Scene

This scene is out of Atonement, where he starred with Keira Knightley.

He dished about the steamy scene to People:

That was the film that really brought him over to being a mainstream celebrity. In fact, after the movie’s London premiere, he experienced paparazzi outside of his house for the first time.

For his portrayal of Robbie Turner, who is convicted a crime he didn’t commit, he received a Golden Globe nomination for Best Actor in a Drama.

“It was awkward, sweaty and not very nice,” he said of his intense scene with Jolie, shown above.

He went on to say, “There was angst involved in that, as always. It was just another day and the same old stuff as usual. I was thinking, ‘Oh God, I hope she doesn’t think I’m getting off on this.’…”

It was her first day, it was her first scene. I had been on the set for two weeks — it was like, ‘Hey, how you doing, nice to meet you, I’m James, oh, we’re going to do a kissing scene now!’

5. His Fans Are Called McAvoyeurs

He is content with his fan base, even though their name can be off-putting.

He told Vulture,” The voyeuristic element of the title inspires a certain amount of paranoia, but they have proved to be the nicest, the most respectful, and kind, supportive fans over the last few years.”

The actor can also spot them out of a crowd, which makes him happy.

“McAvoyeurs tend to be really nice, really chilled out. There’s no hysteria, no craziness, so whenever I meet fans, I can always tell a McAvoyeur, because they’re pretty cool,” he said. 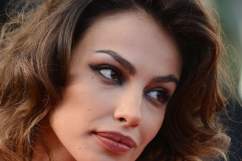