Pretty Little Liars star Lucy Hale seems to be taken with reported boyfriend Joel Crouse. Read on for the facts on Crouse and his relationship with Hale.

1. The Two Recently Attended a Lakers Game With Court-side Seats

Lucy Hale took Crouse to a Lakers game since he’s a big fan and the two sat court-side. Hale posted the above photo with this caption:

First lakers game. Was really great teaching this one the rules of the game. And seeing him looking like a kid in a candy store @joelcrouse

In response, Crouse posted his own photo of the two of them on Instagram with his own caption reading:

Well you guys know how big of a lakers fan I am.. So this may have rocked a tad. Thanks @lucyhale

2. The Lovebirds Will Be Hosting a Joint Birthday Party

On June 14, 2014, Lucy Hale will turn 25 years old and Crouse will be 22. According to the caption from the above photo, the two of them are planning to have a birthday shindig together.

3. Joel Crouse Is a Country Singer

As the son of a preacher, Joel Crouse first began singing in church. Crouse’s website gives a little run-down on his country career thus far:

He wrote his first song at the age of 14, started a band when he was 15, graduated from high school at the age of 16 and was signed to his record deal not long after his 19th birthday. He has since gone on to open shows for Taylor Swift, The Band Perry, Toby Keith, Darius Rucker, Rodney Atkins, Sara Evans, and even bands like the Goo Goo Dolls.

Crouse’s inspiration was his grandfather who introduced him to classic country music.

Because of that time with his grandfather, Joel loves the classics and thinks there’s no better sound than listening to a vinyl recording.

4. Hale Is Set to Release Her First Country Album in June 2014

Perhaps it’s their love of country music that’s bonded Hale and Crouse. Over the past year, Hale has been venturing outside acting to singing country music. On June 3, 2014, Hale will be releasing her debut album “Road Between.” 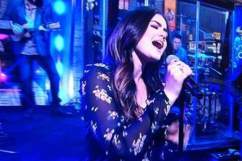 5. Hale Is a Big Fan of Crouse’s Music

Lucy Hale makes it known online that she’s a big supporter of Crouse’s music. She posted the above photo with the caption:

But, Crouse is just as much a fan of Hale’s as she is of his. Check out the below Instagram photo of Crouse rocking some Hale wear, with the caption:

See.. @joelcrouse is doing his part in promotion. Thanks dude

Plus, Crouse puts up pics of Hale’s songs, like the one below:

Crouse used this caption with the above promotional photo:

So If you preorder this girls album you can get a few tunes early. Including this jam “kiss me”. Go check it out. @lucyhale