The 50-year-old actor popped the question to his former co-star, Amber Heard, 28, during the Christmas holiday, and claimed he’s wearing her ring because “it was too big” for her.

There is talk that a summer wedding may be in their future.

When Heard’s ex, Mark Wystrach, claimed she was pregnant, Depp didn’t comment, but he did say, “As far as having more kids, it’s easy for me, and Amber should have the opportunity to have kids if she wants.”

Here are some highlights of their love story.

Depp says the age gap doesn’t make a difference in their relationship.

He told the Daily Mail:

I don’t think so. I’ve got a lot of life experience, certainly, but I don’t feel like I’m looking down on her. I actually feel like she’s the one inspiring me.

In April, the couple spent the weekend in New York City for Heard’s 28th birthday.

In keeping with their shared loved of reading, they visited a rare book shop.

“We have very similar taste in literature, poetry,” she told Empire.

2. They Are Smitten by Each Other

In 2010’s The Rum Diary, they played forbidden lovers.

In the clip above, the couple meet while Heard’s character, Chenault, is skinny dipping. Depp’s character, author Paul Kemp, is immediately captivated by her.

In real life, Heard was just as smitten with Depp. “You can’t help but be sucked into the Johnny Deppness on set,” she said.

“He’s even better than I could have imagined him to be,” she added.

The feeling was mutual.

In an interview to promote the film, Depp praised her by saying she has the grace and talent of the actresses of yesteryear:

She’s of another era, you know. It’s like walking into a room and meeting Lauren Bacall or Betty Davis. … She’s quite something, you know. She’s very special.

Aawww. Amber Heard and Johnny Depp steal a kiss – and give us a flash of that engagement ring! http://t.co/pwclDa30Wy pic.twitter.com/3j2Ef6B4aU

In the Today Show clip above, Savannah Guthrie asked him about what was on his hand.

“OK so, is that an engagement ring?” she asked.

Guthrie pressed on, asking, “Does that mean you’re engaged?”

“It means I’m wearing a chick’s ring,” he said.

When the interviewer brought up the pregnancy rumors, he said:

Expecting what? A child? Good god, what do you think I am, a savage? No, no truth to that. It’s not a shotgun affair.

4. Amber Had a Lesbian Relationship

She came out as a lesbian in 2010, when she brought her then-girlfriend to GLAAD’s (Gay & Lesbian Alliance Against Defamation) 25th anniversary party.

She told Net of her bisexuality:

Depp came out of an even longer partnership before he started dating Heard.

He was in a 14-year relationship with French singer, model and actress Vanessa Paradis. The couple, who announced their split in June of 2012, have two children together, Lily-Rose, 14, and Jack, 11.

In an interview with Rolling Stone, he talked about their split as “at times, certainly unpleasant, but that’s the nature of breakups, I guess, especially when there are kiddies involved.”

5. Amber Said Her Fiance Is Not Part of Her Professional Life

“Johnny Depp is who is he because he is this enigmatic presence that is hard to define, hard to label and hard to pin down,” she told Young Hollywood.

In the same way, Heard does not like to be limited to just being a celebrity.

It’s not part of my professional life. I want to be an artist. I don’t want to be a celebrity. You can find pictures of me [on the Internet] pumping gas, picking up dry cleaning, walking my dog, but nowhere are you going to find pictures of me hanging around at some nightclub. Can you ever imagine yourself in a situation like Brad Pitt and Angelina Jolie or Kim Kardashian and Kanye West, where the world feels like they have a stake in your private life? I would never want it. 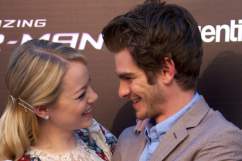