Pitch Perfect 2 casts Katey Sagal to the musical comedy sequel. She will star alongside Anna Kendrick, Rebel Wilson and Brittany Snow. The film follows up with The Bellas during their senior year.

Fans know Sagal for her motherly roles on Married…With Children, 8 Simple Rules and Sons of Anarchy, but the actress sings professionally too. She’s featured on the Sons of Anarchy soundtracks at the encouragement of her husband and show’s creator Kurt Sutter.

She spoke with Rolling Stone on her early career as a backup singer for heavyweights Bob Dylan and Better Midler.

I made a living being a background singer for years. I was one of the Harlettes. Now if you go to see Bette’s show the Harlettes are mostly dancers, but in the old days, when I worked with her it was really a vocal-heavy gig. So we did a lot of the singing behind her.

Pitch Perfect 2 will add the True Grit star Steinfeld to its cast to join returning favorites Anna Kendrick, Rebel Wilson and Brittany Snow. The Oscar-nominated actress doesn’t have much of a singing background unless you include her guest-starring role in the music video for The Cab’s “Endlessly.”

Elizabeth Banks will star and direct the Pitch Perfect sequel. She succeeds Jason Moore, who directed the original 2012 hit movie. Kay Cannon will return to write the movie’s screenplay.

4. ‘Pitch Perfect 2’ Premieres Next May

The movie will premiere on May 15, 2015, and follows Fat Amy and Beca through their senior year at Barden University, according to IMDB.com. No other plot points have been revealed.

Pitch Perfect earned over $113 million worldwide and grossed nearly $65 million in the United States, putting it just behind School of Rock for the highest grossing musical comedy film. 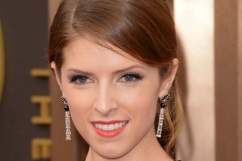