Kim and Kanye are now married on paper. They got their license in California over the past few days. Kim and North are on their way to NYC now.

The couple’s official wedding date in Paris is still set for May 24, 2014. Radar Online writes:

The couple wed this week in California in advance of their lavish Paris celebration … The bride and groom will host an estimated 200 friends and relatives at their wedding bash later this month in Paris.

Despite these reports, People magazine has stated that this news may not quite be the truth.

Despite rumors that the power couple wed in a secret ceremony in Los Angeles, a source close to the family insists Kardashian, 33, remains a bride-to-be … West and Kardashian are expected to marry May 24 during a lavish celebration at France’s opulent Chateau Louis XIV. 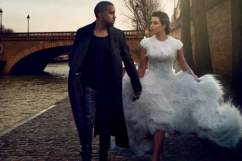