Twenty-one-year-old Linsey Jade is one of the craziest girls the Bad Girls Club has ever seen. In the Season 12 premiere of the show in Chicago last week, she caused all the drama — and was slapped by more than one person in a span of 30 minutes. At the beginning of episode 2, they were right in saying Linsey was on the “hot mess express….” Watch her official video submission for the show above.

Here’s what you need to know about the “Brooklyn Brat.” 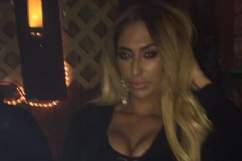 1. She Gets KICKED OFF After One Night!

Ten minutes into the second episode, Linsey goes nuts, storms out of the limo, and punches the cameramen. The BGC producers have to calm her down, only to have her scream that she wants her dad and wants to go home. “I will literally beat the living sh** out of you” is one pleasant line she shouts repreatedly. After finally figuring out how to shut the car door, she goes home.

When the producers come in and tell the rest of the girls Linsey has been kicked off, they’re ecstatic… but they’re worried her ‘spirit’ is haunting the house… So they burn her photo.

When showing the cameras around her room for her submission video to Bad Girls Club, Linsey says:

She then takes us to her bed, which has a bunch of “club bullsh*t” on it, and more pictures of herself. Fortunately, she hasn’t worn those shoes around her cousin, unlike Loren, who admitted on this week’s episode that she dated her cousin for a while without knowing.

3. She Thinks Chicago Is in Boston

In an interview with one of the show’s producers, Linsey makes it clear that she does not know whether Chicago is in Boston. The Chicago Tribune details the conversation:

Producer: Do you want me to tell you where this season is going to be? … It’s going to be in Chicago.

Producer: Chicago, not Boston. Did you think Chicago was in Boston?

4. She Believes in Hexes, Potions & Curses

RT @bae_sic: Michael Jackson looking at linsey from his grave like… #BGC12 pic.twitter.com/FwPqXexPhd

I have hexes, potions, and curses cause it kind of describes my personality.

This can’t be too surprising, since in the premiere, she claimed that she knew Michael Jackson was going to die before he actually died.

Linsey has 37 subscribers and 4,198 views. She doesn’t talk much in her videos, which mostly are of her dancing with her sister. Oh, and she has one video where she does the ‘No Makeup Challenge’.

Read More
5 Fast Facts, Reality TV, TV
From her "f**k me" shoes to her mirror-less makeup technique, Linsey Jade is the most comical — and annoying — Bad Girl the show has seen in years. Will she survive past next week?