Let’s get to know Miles Brockman Richie, the son of music legend Lionel Richie. Check out the 5 Fast Facts on the 19-year-old below.

Miles Richie was hanging out at a recording studio in Hollywood this past Friday night, along with Kylie Jenner, French Montana, and Khloe Kardashian as Richie was getting tattooed by artist John Petro. In what seemed just to be innocent fun, Kylie Jenner stepped in and helped Petro tattoo her initials on Richie’s hand. The only problem, aside for Richie permanently having Kylie’s initials on his hand, was that Kylie is only 16 years old. It’s illegal to have someone under 18 give a tattoo. 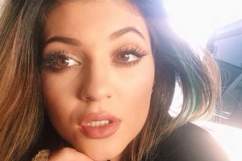 In the below photo you can see Miles hanging out with the Jennner crew at Coachella 2014.

The story of Miles’ mother and Lionel Richie is quite scandalous. Lionel Richie was married to his first wife and college sweetheart Brenda Harvey, but the two divorced after 18 years of marriage after Lionel was caught in an affair with Diane Alexander. Wikipedia reports the crazy story as:

In 1986, while still married to Harvey, Lionel began a relationship with Diane Alexander. He would later separate from Harvey and, in 1988, she allegedly discovered Richie and Alexander together in a Beverly Hills hotel room by saying she was “room service” and breaking in the door. A confrontation ensued and Harvey attacked both Richie and Alexander brutally. Harvey was arrested for spousal abuse, trespassing, assault towards Alexander, and vandalism.

3. Miles Is Named After His Father and Grandfather

4. Frozen Is His Favorite Movie

After Coachella 2014, about a month ago, Richie posted the above photo with the below caption about his favorite movie:

Watched my favorite movie Frozen before I drove back from coachella. Thinkin about gettin the Duke of Weselton tatted on me. One of my favorite characters of all time.

We wonder if Miles will let Kylie give him that tattoo as well.

5. Richie Has Two Sisters, One of Whom Is as Famous as His Dad

The above photo was taken at one of Lionel Richie’s concerts in Las Vegas in 2012. You can see Lionel’s three children, Miles, Sofia and Nicole posing together in support of their dad. Daughter Nicole even joined her father on stage that evening. Others who accompanied Lionel Richie on stage included Tim McGraw, Kenny Rogers, and Faith Hill.

Most of Miles Richie’s social media photos are of his sisters, his mother, and father. He even got tattoos dedicated to some of them. Have a look at the below photo of Miles’ tattoo of big sister Nicole Richie’s name.