McManus was not shy to get in on the action during the show, and spent a decent amount of time cracking up with his long-time buddy, Carell.

Here’s what you need to know about McManus:

McManus and Carell have been friends since they met in 2005. Carell was a guest on “Rove Live”, McManus’s Australian television variety show, and came back to visit the show multiple times.

Get Steve Carell to promise you something, because he will make it happen… when he says to you, ‘Hey, I want to do something with you,’ he will back it up.

2. He Gets to Keep His Aussie Accent for the Show

Luckily for McManus and viewers at home, the Australian doesn’t have to drop his accent for Riot. On Rove LA, he hosted a funny segment where he talks about America’s ignorance with Australian accents, and interviews people on the streets of the US. Regarding Americans’ ignorance about Australian accents, he’s pretty much right …

3.He’s Been on the Tonight Show with Jay Leno

In Jay Leno’s segment, Meal or No Meal, Rove is interviewed with two other comedians to decide if an audience member’s talent warrants a meal. He may only be saying one-liners, but they’re pretty darn funny.

Emmett was an Australian actress and singer who was diagnosed at age 24 with breast cancer. Seven years later, she married Rove. Belinda died on November 11, 2006 in St. Vincent’s hospital in Sydney. McManus told DigitalSpy, that when his wife died:

Everything switched off. Then, one by one, little switches would come back on- where I could feel there was a little seed of happiness in there somewhere.

5. He Interviewed Miranda Kerr on His TV Show

Miranda Kerr interview on ROVE (Australia)Miranda Kerr interview on ROVE (live with Rove McManus). Original upload: 89,413+ views. From rural Australia to the top of the international modelling scene, Miranda is the first Australian to appear in a Victoria's Secret runway show. Raised in the Australian country town of Gunnedah, Miranda is now based in New York, the heart and…2010-02-04T08:49:04.000Z

In a 2010 interview, Kerr tells Rove that she had a dream about him the previous night, and that her belly button is an innie that can become an outie. She also plays one of Rove’s favorite shows, “20 Bucks in 20 Seconds”, which is more or less a series of hysterical and simple questions. She admits that she’s partial to pirate costumes. 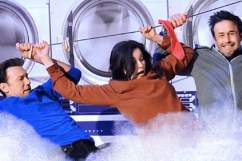