The results are in! Tune-in tonight (9/8c) to find out who stays and who goes! #idol pic.twitter.com/fQ7hzHOIzH

American Idol was down to the Top 5 singers, but we had to say goodbye to one of our favorites tonight. We’ve all grown to love Alex Preston, Jena Irene Asciutto, Caleb Johnson, Sam Woolf, and Jessica Meuse, but it was time for one of them to leave. Who was it?

As a twist on tonight’s show, Ryan Seacrest let each of the contestants vote on whether to keep everyone around for one more week and eliminate two contestants next week or to just continue with the normal eliminations … While three people voted “yes” to keep the group together, two voted “no” and then it was announced that Sam Woolf was sent home.

To break up the results show, judge Keith Urban performed for viewers. Check out his rehearsing for the performance in the below video. About two-thirds of the way through, the video shows some behind-the-scenes Idol footage of Keith as well.

Idle Chatter: Episode 004Go behind the scenes with Keith as he and his band are rehearsing for his American Idol performance. Catch the full performance on FOX at 9/8c on May 1st. Get FUSE at: http://smarturl.it/FUSEdeluxe2014-05-01T16:26:09.000Z 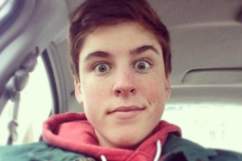