Kiefer Sutherland made his return last night in the premiere of 24: Live Another Day.

1. Sutherland Has More to Celebrate than his Return to TV 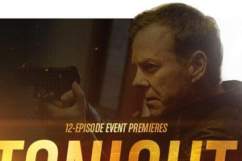 People reports that Sutherland is dating Sofia Karstons and the two “are very happy together.” However, his rep has not responded to the dating news.

2. Karstens Separated from Husband Jason London Over the Winter

Karstens is actually still married, though she’s on the road to divorce. According to TMZ, Karstens and her estranged husband, actor Jason London, separated in February 2014. TMZ wrote:

It’s unclear why Sofia decided to end things … but we’re guessing his arrest last year factored in — the one where he was arrested for disorderly conduct/fighting and assault. Jason and Sofia released a joint statement saying they love and respect each other … but feel the breakup is necessary to “focus on some growth independently.”

3. The Two Recently Traveled to New York Together

According to People, Sutherland took his new girlfriend along with him while promoting 24: Live Another Day.

The pair have been spending a lot of time together, including a trip to New York City where Sutherland, 47, promoted 24: Live Another Day.

4. Karstens Is Also an Actor

Karstens has her own acting resume, known for Lovelace, The Greatest Script Ever Written and Bad Blood… The Hunger. Karstens was also a soap opera actress, appearing on The Bold and the Beautiful. Check out Karstens’ death in Bad Blood … The Hunger in the above video clip.

5. Sutherland Has Had Failed Marriages as Well

Karstens isn’t the only one coming from a messy marriage. Sutherland was previously married to Elizabeth Kelly Winn and Camelia Kath.