With Season 7 behind us, let’s take a look at what’s ahead in the next season of The Big Bang Theory, which begins on September 22.

The show enjoyed it’s most watched season finale in its history on May 15.

When word came that the show was renewed for another three seasons, executive producer Steve Molaro said, “I’m going to move forward [in the thinking] that ten is the end unless we’re told otherwise. My concern is that we do it right and we end this show in a way that is as befitting of these characters that we respect and love.”

The show’s extension was CBS’ first scripted pickup for the 2014-15 season. This fact is not surprising considering the show has been television’s number 1 comedy since the 2010-11 season.

Since CBS just got the rights to Thursday night NFL games, the show will temporarily move to another night for the start of Season 8.

Once the eight football games are over, on October 30, the show will back to it’s Thursday time slot.

Production was supposed to start on the new season on July 30, but due to salary negotiations, it’s been halted.

“Due to ongoing contract negotiations, production on The Big Bang Theory — which was originally scheduled to begin today — has been postponed,” WBTV said in a statement.

As we wait for the new season to begin filming, let’s take a look at what we can expect in Season 8.

1. Sheldon Has Left Town — But Not the Show

At the end of Season 7, we find Sheldon at a crossroads.

He cannot take the news of his roommate’s pending nuptials, so he’s at the train station, ready to leave town.

At the insistence of Penny, Leonard leaves him there. There was a touching scene where the couple says their goodbyes to Sheldon.

“When Penny came over and hugged Sheldon and gave him a kiss on the cheek. I really got choked up there. I wasn’t quite expecting that,” Molaro told EW.

Jim Parsons told TV Line, “He gets the hell out of there and I have no idea where he’s going or what he’s planning. I won’t know until I come back and read the first episode [of Season 8].”

The actor continued to say:

It was very interesting to read it for the first time and then to play the final episode because it really gets at the crux of something that is perhaps his defining characteristic as a character on television — which is his resistance to change. If you look at it through that lens, so many of the things he does, the things he says, the places he sits, etc, have everything to do with the fact that this is the way it’s done, this is the right way to do it and this has served him fairly well as a human. They’ve got him in a situation now, the writers do, where it’s not possible to carry on without some of these changes.

TV Line asked Parsons if it’s possible that Shelly never even gets on the train.
He answered, “I never thought of that, but you’re right — he could show back up at home immediately, couldn’t he?”

As far as ‘Shamy’ goes, Parsons is up for anything:

I don’t know that we’re headed for the bedroom or the altar any time soon. But, whatever- The writers have been so good with the pace of it, just bring more is all I would say.

2. Penny Gets a New Job & Pushes Back the Wedding Date

At the end of Season 7, Penny realizes that she has to make some “smart decisions.”

After countless years of her facing dead ends in her acting career, she finally shifts gears and enters into a new profession.

At the Television Critics Association’s summer press tour, Chuck Lorre, the show’s creator, said, “She’s going to find some confidence and self-esteem, which acting does not provide in great heaping doses.”

She becomes a pharmaceutical rep, which Lorre says, affects her relationship with Leonard because it works to “unbalance their relationship as the power shifts.”

As far as setting a wedding date, Penny has her reasons for putting it off.

During Comic Con, Molaro said, “They are engaged, but the wedding is some time off in the future … Penny’s first goal is to put the date far enough in the future so everyone knows she’s not pregnant.” 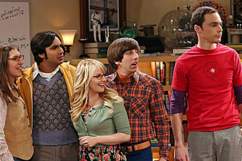 3. The Cast Is Asking for a Huge Raise

During the seventh season, they each earned $350,000 per episode. Mayim Bialik and Melissa Rauch already finalized their raises with Warner Bros. Television earlier in the year.

The cast seems to say they are invested in the show, with Cuoco telling CBS This Morning:

We’ve all actually have said recently we feel like we have so many more stories to tell. We’ve got years left in us. We don’t want it to do be done. I wish it would last forever.

There are people at Warner Bros. Television and people representing the actors who have done this before. This will work itself out. I think it’s great; I want them all to be crazy wealthy because nobody deserves it more than this cast. It’ll work out.

4. Emily Will Be Back

RT if you're digging Raj and Emily's relationship! :) #TBBT pic.twitter.com/g90DymgNXG

The actress is also on Bones, but Molaro assures us she will remain.

He told The Hollywood Reporter, “She will be continuing on in some form, yes. I don’t have much of a clue about Season 8 yet, but she will be around.”

He also told TV Line that her other series will not affect her return:

We are aware [of her Bones role], and they are aware that we are using her, too. … I’m sure it will be one of those things where we can work it out, scheduling-wise, and it’ll all be OK.

5. More Will Be Revealed About Howard’s Mother

Mrs. Wolowitz’s health issues are a lot for Bernadette and Howard to take.

“Coming up, she’s going to need a little more health care than she has been needing and as a good son and daughter-in-law, that is going to fall on their shoulders to some extent,” Molaro said.

In this season’s penultimate episode, we’ll be introduced to Marta, the woman in charge of tending to Mrs. Wolowitz’s each and every need. We’re not going to give everything away, but let’s just say that by the end of the episode, you’ll be writing thank you notes to Marta for what she reveals.