Former reality star Zach Roloff, 23, of Little People, Big World, has proposed to his 22-year-old girlfriend Tori Patton and she has accepted. Read on for the full story.

Roloff reportedly asked Patton to marry him yesterday on Wednesday, April 30, 2014. In an adorable post on Facebook, Zach wrote:

She said yes! It’s been a brilliant 24 hours and totally excited for what the future holds.

The Wrap now reports that TLC may be planning a special to document the wedding and/or engagement.

2. Patton Was Proposed to in an Open Field

Apparently, Roloff had a little help from his brothers in capturing the beautiful moment. Zach Roloff got down on one knee and proposed to Tori Patton in a field while his brothers James and Jacob took photos of the proposal.

Two months ago Jeremy Roloff posted the above photo with this as a caption:

Jeremy’s fiancee Audrey then posted her own photo with the caption:

The question: Audrey Mirabella Botti, will you marry me? The answer: YES!!!!!!!!!!!! You’re the one I want to team up with for life. Jeremy James Roloff, to say I’m I love you is an understatement. I’M GETTING MARRIED!!! #braidit #journeyofjerandauj #tresslelove

It looks like the Roloff family will have a lot of wedding planning to do now that Tori Patton will be joining their clan in addition to Audrey Mirabella Botti, Jeremy’s fiancee.

4. The News of Zach’s Parents Separating Just Came Out in March 2014

In March 2014, around the time of Jeremy Roloff’s marriage proposal, it came out to the public that parents Matt and Amy Roloff had separated. For more information on the couple’s status, click on the below link. 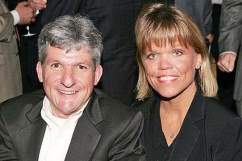 5. The Roloffs Are Excited to Welcome Their New Future Daughter-In-Laws Into the Family

Thank you @juliagreenphotography for our awesome engagement photos! And thank you @tlc for the awesome show! We are so overwhelmed with congratulations and appreciate all of it! Thank you!

Mother Amy Roloff posting a sweet and heart-warming message about Tori Patton and Audrey Mirabella Botti, showing her happiness for her two sons in addition to show her love for her new future daughter-in-laws.

Read More
Facebook, Reality TV, Twitter
Zach Roloff has popped the question to girlfriend Tori Patton and the two are now engaged. Read on for the details and to see the proposal photo.