Caesar and his loyal following of primates became the surprise heroes of 2011’s Rise of the Planet of the Apes. The uprising and subsequent battles between the apes and the humans they despised led to an action packed climax that has led us to the next entry in the prequel series.

Now the humans have had to deal with a powerful virus that has lead to the fall of man’s once thriving civilization. It’s time to another war as they look to take down the animals they think were the cause of this virus. Which means we’ll get to see another epic Apes film.

Here’s the 2nd intense trailer for the next film in the Apes prequel series, Dawn of the Planet of the Apes! 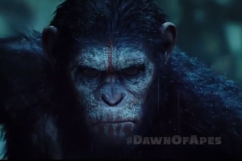 WATCH: New ‘Dawn of the Planet of the Apes’ Trailer