Yvonne Strahovski steps into the role of CIA agent Kate Morgan, a “brilliant but impulsive CIA field operative” in 24: Live Another Day.

Kate immediately finds Jack’s capture by the CIA suspicious when she sees an easy escape route he should have taken to avoid his captors. This ahead-of-the-game thinking has her on par with the type of agent Jack Bauer was at CTU.

She talked to E! News about she “holds her own” against one of television’s greatest characters in history.

“They’re both impulsive, they both break the rules and they both take matters into their own hands a lot. I think that she’s in a way sort of like that female version of him, which I don’t know if we’ve seen that in 24 before.”

Watch the above video to hear how her co-star Benjamin Bratt described her relation to Jack. (It’s at the 4:05 mark.)

2. Routine Haircuts Were a Must on the 24 Set

The action of 24 takes place in the span of a day, so the actors needed to look the same throughout the episode. Since the show doesn’t shoot in one day, Yvonne needed to have her hair cut every three weeks to keep the same appearance.

She explained the shooting schedule during a screening of Live Another Day‘s first episode at Old Billingsgate Market in London:

“(During shooting) don’t put on weight because it’s really bad for the show and we’re all cutting our hair every three weeks or four weeks. We have to otherwise it would grow and then it doesn’t match.”

In her last TV stint, Yvonne played CIA agent Sarah Walker who was assigned to protect computer geek Chuck Bartowski after he inadvertently downloaded sensitive information into his brain on NBC’s Chuck.

On 24 she gets to stretch he action skills again, but she told E! News in the video below that she enjoyed shooting the meaty drama scenes more.

I come from that action background. It’s almost like ‘I’ve been there, I’ve done that.’ So running around with a gun, it’s not like, ‘Oh my God, I get to run around with a gun.’ I get excited about the scenes and the meaty stuff, which I feel like we get at here on 24.”

4. She Comes From the Land Down Under

Yvonne was born and raised in Australia by her Polish immigrant parents and speaks fluent Polish. She attended her first acting class at age 12 before studying drama in college and working professionally in Australia. She traveled to America with a group of friends looking for an agent that led to her lead role on Chuck.

She described her personal style to Malibu Magazine as “carefree” and a “can’t be bothered” attitude. She’s never happier than when she slips into her wetsuit and grabs her surf board to hit the waves, even if its in the 50 degree waters off of the English coast.

5. She Appeared on the Cover of Maxim

Maxim magazine took notice of the beautiful Yvonne in 2011, placing her on its September cover in a nude bikini with fringe around the deep v-neck cut. She’s ranked in on the magazine’s Hot 100 four of the last five years, landing as high as #7 in 2009.

The producers of FX’s Louie noticed more than her stunning body when she starred on Broadway’s Golden Boy in 2013. The show cast Yvonne shortly after to play sexy model Blake who cheers up Louie C.K.’s after he bombs at a benefit for Jerry Seinfeld in the Hamptons. 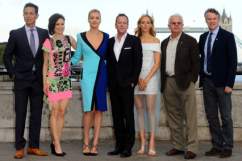