Brandon Jay McLaren plays ICE agent Dale “DJ” Jakes on USA Network’s hot summer series Graceland. On last week’s episode, Jakes moved out of the Graceland house to prove he could provide a home for his estranged son Daniel, but things didn’t work out as he planned.

McLaren spoke with Heavy about Jakes’ outlook in season two and his pick to win the 2014 FIFA World Cup.

Jakes appeared to turn a corner in the season two premiere. He was smiling, having fun and welcoming home his former housemate Mike Warren with a big bear hug. McLaren told Heavy about coming back to find his character so changed.

I knew at the beginning of the scene that Jakes would be in a different place and I knew the reason why. It was a lot of fun. I was able to play his joy to an absolute level which was great because you never see Jakes like that.

The joy wouldn’t last for the Customs agent, who moved out of the Graceland house to prove to his ex Cassandra that he could provide a safe home for their son Daniel. Instead, she serves him with a restraining order to stay away from her and their son.

Like life, you make plans and a lot of times things don’t work out the way you planned. You’ll see how Jakes reacts to things maybe not going his way. He takes it hard so that’s going to be explored a lot this season.

McLaren loves to cook. His favorite dishes, like curried goat, come from the Caribbean where his parents are from and they remind him of “being home and being safe with my family,” he told C Magazine.

His co-star Vanessa Ferlito also loves to cook, and will put her kitchen skills to work for another “Sauce Night” on an upcoming episode. “There’s definitely another sauce night. It’s always a fun scene to shoot,” McLaren told Heavy.

He and Ferlito have not gotten the chance to swap recipes off-screen though:

It’s always heard to get one of us over to cook for each other. We plan to but we haven’t been able to put it together.

McLaren went into the 2014 FIFA World Cup rooting for Spain. When the Spaniards were booted in the first round, he switched his allegiance to the hometown team to chase the cup, he told Heavy.

Now that’s Spain is out, I would like to see Brazil win at home. I think that would be really, really special.

The Canadian actor played soccer growing up and accepted a full scholarship to the New York State University at Albany to play. He graduated with a Bachelor of Science degree in Human Biology with plans to attend medical school, but returned home to Vancouver to pursue an acting career full time.

4. He Played Suspect Bennet Ahmed on AMC’s The Killing

McLaren broke out in 2011 on AMC’s The Killing as Bennet Ahmed. In his next major role, TNT’s Falling Skies killed him after six episodes due to McLaren signing onto the Graceland pilot.

His role as Jakes on the USA drama is his longest-running character yet. He told Heavy about the opportunity to spend more time with his character:

It’s a great feeling to be able to be with the character for this long. You really get a sense of who the person is and live with that person. As an actor I love being able to spend all this time with Jakes and see him change and regress and all those kinds of things.

Last year, he directed his brother Brent McLaren a.k.a. Alma Mater’s music video “The Valedictory Address” (watch the video above). The actor will next star in the indie film The Milwaukee Project. He will also serve as executive producer on the project.

McLaren said he likes working with friends and staying creative on side projects during the Graceland hiatus:

I just like to stay creative in all aspects like directing, acting and getting together with like minded people to make stuff. We make it a point to just get together and create stuff. That’s always on my agenda. 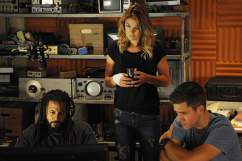