Brittny Gastineau has been attacked in a West Hollywood hotel room, according to TMZ. After been spotted with a huge black eye, the news broke that:

Brittny was at the London Hotel with a male companion — a man who himself has some fame. We’re told Brittny claims the man beat her up badly in the room … so badly she had to go to the hospital.

The identity of Brittny’s “attacker” has been reported as Marquis Lewis, an artist known as Retna. For more information on him: 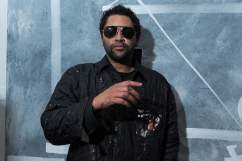 Below you can find some of the horrendous Twit pics of her black eye.