At the 2014 Tony Awards, Bryan Cranston is nominated for Best Leading Actor in a Play for All the Way.

Predictions are leaning towards a win for the 58-year-old versatile actor, who has acted in everything from cartoons to sitcoms, and is now adding Broadway to his resume.

In All the Way, Cranston takes on the role of President Lyndon Johnson.

In the three-hour show, where Cranston himself is on stage “almost every minute,” he is earning much-deserved praise.

Bryan has the two things you want in the actor who plays L.B.J. He’s incredibly charismatic and charming and funny. And he’s also terrifying.

A pivotal year in American history—a landmark civil rights bill was passed, America began its involvement in Vietnam…and one man sat at the center of it all, determined to lift the country out of the ashes and rebuild it into The Great Society—by any means necessary.

To be on Broadway is a dream come true for me. I walk to work every day and I cant wait to get there, because we have a great story to tell.

On Breaking Bad, Cranston earned critical acclaim for his portrayal of Walter White, a chemistry teacher diagnosed with cancer who goes on to sell meth.

In an interview with GQ, he spoke about the unique challenge the character was to play:

But I’m not sure this has happened before: Where we take one kind of person—bright, depressed, just turned 50, dying of cancer—and say, ‘For the next two years, he’s going to go on the greatest roller-coaster ride of his life.’

He played White from 2008 until 2013, and earned three consecutive Primetime Emmys. He shares this historical milestone with Bill Cosby, who is the only other person to win that many in a row.

Cranston met Robin Dearden when they costarred in Airwolf, a 1984 television series.

They married in 1989 and welcomed their only child, daughter Taylor, in 1993.

When asked about his favorite thing about Dearden , he recently told Humans of New York, “She still gets giddy when she sees a firefly.”

One of my most favorite live action appearance in Family Guy, featuring Bryan Cranston :D pic.twitter.com/fQsnlc5MJ2

For those roles, he used the pseudonym Lee Stone.

His experience includes roles on The Simpsons and Family Guy.

Anime Networks detail his work on their site.

5. He Says He Has a Scary Face

In an interview with Katie Couric, he talked about his face’s influence.

“Void of emotions whatsoever and you’ll see that I scare little children,” he said.

He went on to explain that when he is in between roles, he lets a beard grow, and experiments in public:

Mothers are grabbing children’s hands and pulling them away, you know,” the actor recalled. “And I’m just pleasant, but the look itself is nasty. 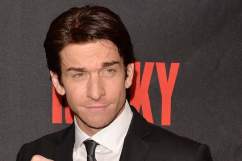