In arguably the most anticipated comedy of the summer, 22 Jump Street, Jonah Hill and Channing Tatum resume their roles as colleagues and besties, Schmidt and Jenko.

The chemistry between the actors is apparent on screen and is undoubtedly what makes the franchise such as success.

As the movie hits theaters on June 13, let’s celebrate one of our favorite Hollywood bromances.

1. Jonah Reached Out to Chan First

The two first met on the phone, when Hill called Tatum to ask him to be his costar in 21 Jump Street.

As Hill explained in a piece he wrote about his friend, Tatum first responded with, “I’m not funny.”

Already a fan of his work, Hill replied, “I don’t need you to be funny, I need you to play this character as honestly and true as you did in A Guide to Recognizing Your Saints.”

Tatum gave in, saying, “Okay, but if I suck I’m going to kill you. Seriously.”

That was the beginning of a lifelong brotherhood, and the actors know their movies together are that much better because of their bond.

“Some much of the humor and the heart of this movie comes from the fact that Chan and I have a really great friendship in real life,” Hill said in the video above.

Tatum added, “Jonah is a really fun, hilarious person, and I just love talking to the guy.”

2. They Say They Would’ve Been Friends in High School

At the beginning of 2012’s 21 Jump Street, we see a flashback featuring the characters in high school.

Their looks were modeled after the actors’t real-life teenage years, with Hill having bleached hair, and Tatum wearing a letterman jacket.

Although their appearances were glaringly different, the boys are confident they would have been tight in school.

The feeling is mutual, with Tatum continuing, “If we were besties in high school, we would probably just end staying up all night talking on the phone and having sleepovers and stuff.”

3. They Still Make Time for the Ladies in Their Lives

The buddies still make time for their women.

Tatum is happily married to Jenna Dewan-Tatum since 2009. The pair, who met on the set of Step Up, welcomed a daughter in 2013.

The couple was first spotted together in April. In the photo below, the dietitian is licking the actor’s sunglasses at La Cienega Park in Beverly Hills.

4. They Miss Each Other When They’re Apart

Hill, who lovingly refers to his friend as “Tatum Tot” on set, misses him, even when he’s nearby.

Hill told Parade, “Last night, I was like, ‘I miss Chan. I haven’t seen him in a few hours.’ He was in the same hotel, and I wanted to see what he was up to!”

In a 2012 interview, Tatum gushed about how he already wanted to do a second film with Hill.

“There’s not been a movie in my career that I’ve had more fun on and literally fell in love with my costar, other than the one I married [Dewan],” he said.

5. They Made an Intimate Bet

Before 21 Jump Street hit theaters, the boys were discussing the potential earnings of their first film.

They admit there was some drinking involved when Hill told Tatum, “I will kiss your tip! I will kiss the tip of your d**k through your underwear if we make $35 million.”

After opening weekend, it was reported that the comedy had already made 36 million.

Tatum still hasn’t forced him to uphold his part of the bargain.

In an interview with GQ, he said:

I haven’t made him do it yet. For obvious reasons. That’s a bad bet to lose—it’s not too good to win, either. But definitely the shame of it would be enjoyable. It’s my trump card, for sure. He tries not to bring it up at all costs. Unless he did something horrible to me, I don’t know if I could ever cash it in. It would change our relationship forever. 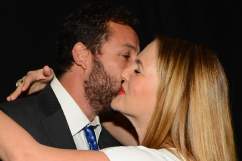