We were pretty shocked at how great of a film Rise of the Planet of the Apes turned out to be.

Watching Caesar’s upbringing into the brilliant and militant minded ape he eventually becomes was awesome. Now that we’ve all witnessed the rise of the prime ape empire, it’s time to to get a look at their impending dawn. On July 17, 2014, movie-goers will get to bask in the action-packed sequel. Caesar’s war with the human race will reach a fever pitch this time around.

Here’s everything you need to know about the next box office conflict between the apes and the remaining humans of Earth in Dawn of the Planet of the Apes.

1. This Sequel is Set 15 Years After Rise of the Planet of the Apes

Caeser, the leader of the intelligent apes who were genetically modified once before, lives among them while maintaining a fragile peace with the human survivors. Another major conflict breaks out between the apes and Earth’s last remaining survivors, though. This war is set to determine which species will remain dominant and rule the Earth.

2. Andy Serkis and Several Other Actors Handled the Motion Capture Body Work for the Onscreen Apes

Dawn of the Planet of the Apes: Building a Better ApeWeta Digital's visual effects supervisor on how much the apes have evolved since the first film.2014-06-24T00:00:02.000Z

Once again, Andy Serkis will reprise his role as Caeser. A few of the other actors who are slated to play the following apes listed below:

Check out the video above to get an understanding of the special effects magic that made everything work together in Dawn of the Planet of the Apes.

3. The Director of Cloverfield Handled the Directing Duties for this Movie Reboot

Rupert Wyatt, the director of Rise of the Planet of the Apes, was originally slated to direct the sequel. Rumors started circulating around 2012 and pointed to Wyatt looking to leave the film’s director role. It was reported that he was concerned that the once planned May 2014 release date wouldn’t give him enough time to finish the film properly.

Around October 2012, it was announced that Matt Reeves was selected to replace Rupert Wyatt. Reeves is best known for his work on the 2012 monster movie Cloverfield.

4. This is the 8th Overall Film in the Planet of the Apes Movie Franchise

As far as the main film series and reboots go, Dawn of the Planet of the Apes officially counts as the 8th film in the Apes franchise. Here’s the full list of films that came before it:

5. The Next Film in the Apes Prequel Series is Launching in 2016

Luckily, Matt Reeves has already been selected to direct the 3rd film in the reboots of the entire Apes film series. The as-yet untitled 3rd reboot film will already has a release date, though – July 29, 2016. MTV put up a few comments from Matt Reeves’ Happy Sad Confused podcast where he spoke about his dreams of doing another Apes film. He also spoke about his ambition to show movie-goers what the eventual ending will entail:

People have said to me, ‘How are you interested in this when you already know the ending? You know it becomes the Planet of the Apes.’ But that’s the most interesting part. Somehow, the character that Andy [Serkis], the writers and Weta created, he leads to a path where the apes aren’t just the dominant species, but they also have humans as slaves — all of these things that are very different from where we are in ‘Rise’ and ‘Dawn.’ How do we get there? What does it tell us about our nature, that this becomes that? That’s what got me excited about continuing down that vein 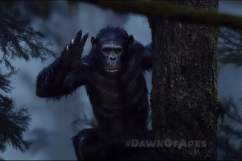 WATCH: ‘Dawn of the Planet of the Apes’ Official 3rd Trailer

Read More
5 Fast Facts, Andy Serkis, Dawn of the Planet of the Apes, Gary Oldman, James Franco, Judy Greer, Keri Russell, Kodi Smit-McPhee, Matt Reeves, Movies, Planet Of The Apes
Caesar and his band of apes will have to engage in another heated conflict with the human race.