The professional sport of multiple martial arts (MMA) has blossomed into a multi-million dollar entity. Since the humble beginnings of the UFC until the present day explosion of numerous MMA organizations, MMA has welcomed a long line of would-be badasses into its ranks. Fight Life documents the many hardships and victories that come along with trying to break even in such a competitive line of work.

Fight Life follows an array of up and coming and established fighters from a few years back. This documentary plays out like a brief history lesson as it shows rising stars from back in 2009 who have gone on to become household names in the sport today. It also offers viewers a rare look at some lesser known fighters with extraordinary backstories. Every individual MMA fighter that’s given a few moments to explain their never ending passion for what they do is worth watching and listening to.

Jake Shields, Nick Diaz, Gilbert Melendez, Lyle Beerbohm, Frank Shamrock, Chuck Liddell and several other MMA personalities give us an inside look at everything it takes to become a true fighter. It’s refreshing to see the non-glamorous moments of these fighters lives as they prepare to fight within the glitz and glamor of big time MMA feds. Watching Shields take his daughter to Jiu-Jitsu training, keeping tabs on him as he sweats profusely after weight exercises and listening to him speak about his upcoming fight are all memorable moments.

The other subjects of this documentary are no less interesting than Jake Shields. You’ll no doubt become enamored with Lyle Beerbohm, a reformed drug dealer/abuser turned MMA pro. His story is an inspiring one, which gives you more of an incentive to watch him succeed and make his parents proud. One of Lyle’s most heartwarming stories revolves around his nickname “Fancy Pants” and his sparring domination makes him a standout part of this film.

This documentary does an excellent job as a look into each fighter’s livelihood, but it also performs well at showcasing the highs and lows of every fighter’s life. The arduous training regimen, lack of steady pay and health insurance for many fighters, the constant pain and injuries, the low annual salary etc. are explained in detail. For hardcore fans and even non-followers of the sport, Fight Life offers a thorough and respectful explanation of the in’s and out’s of MMA.

Fight Life is one of the better MMA-focused documentaries out there. It does a fine job of giving the spotlight to a group of fighters who were working to become major stars back in 2009. It also gives us all an inside look at the many struggles and triumphs that are associated with a pro fighter’s career. This is a must-see for fans and even non-fans alike. 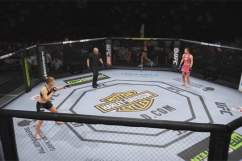