The spinoff to the popular kid-friendly Boy Meets World, which ran from 1993-2000, the new show is sure to make old fans nostalgic, while entertaining a newer generation.

What makes the phenomenon so interesting is the fact that many of the older fans will now watch alongside their children, introducing them to the characters they grew up with.

Let’s look at the cast and story that behind the highly anticipated sitcom.

The fan favorite couple, who we watched grow up and fall in love in the 90s, are back as parents.

The kids, Riley and Auggie, played by Rowan Blanchard and August Maturo, have quickly been welcomed into their parents’ hearts- on and off screen.

Life is imitating art, and the adult actors are starting to feel familial instincts.

Rowen and Auggie, who plays our son, have become like these children of ours that I feel protective of and really, really care about them deeply.

Fishel agreed, saying, “And I think there are things that I wasn’t even aware I would feel so strongly about that I now suddenly feel very, very strongly about. And it does have to do with the protection of them.”

2. Fishel & Savage Are the Only 2 Characters Returning Full Time

When we left Cory and Topanga at the end of Boy Meets World, they moved to New York City. The series holds true to that, and is set there.

In an interview with EW, the longtime on-screen couple talked about what has changed and what has stayed the same in their relationship.

But I think when he was younger, there was that sense of humor but maybe with a little less focus because he was a kid. And we all had that because we were kids. Ben now is incredibly focused and has a very good vision for what he wants to see this show become and has a good vision for the entire show’s trajectory.

Savage added, “I would say Danielle’s always been wonderful, and she’s grown into a confident and remarkable woman, and I like watching her continue to grow and continue to become more confident, if that’s possible. She’s funny, she’s talented.”

As far as the rest of the beloved cast, we will see teacher Mr. Feeney, Cory’s best friend Shawn Hunter, Minkus the nerd, and Cory’s parents back in guest-starring roles.

Riley, the girl who is meeting the world, is played by 12-year-old Rowan Blanchard. In the video above, we see the opening credits, complete with the fitting song, “Take on the World,” sung by the actress herself.

Her industry credits include roles in Spy Kids: All the Time in the World in 4D and The Back-up Plan.

Salary wise, TMZ reported that the tween actress is making $10,000 each episode. Since the show has already been picked up for 21 episodes, that means she’ll make $210,000 at the end of the first season.

Of course, her TV parents are dealing with all the milestones she’s experiencing.

Savage talked to EW what her first date episode was like:

Well, this episode is Riley’s first date, and it’s sort of the parents — really Cory — terrified that his daughter is going on her first date. It’s basically how he’s handling it and then the date, and then Topanga’s character is a lot cooler and a lot more confident and happy.

The teen star gushed about her on-screen parents to Teen Vogue saying, “Ben is the funniest person I have ever met, and Danielle is so down to earth and suuuuch a mom, even though she’s not a mom in real life.”

4. You Can Already Watch the Pilot

The Disney Channel made the first show available on its site.

Spoiler TV also ran a list of all its first season episodes along with synopsises.

5. Fans Are Showing Their Support & Speculation

In the video above, titled Girl Meets World Fan Project, fans from all over the world express their enthusiasm for the spinoff.

“I grew up on Boy Meets World, and Cory and Topagna has huge impact on my life,” one woman said.

Savage himself saw the heartwarming video and tweeted:

Thank you to everyone who took part in this RT @BMWSequelDotCom: Fan Project Video for the cast of #GirlMeetsWorld http://t.co/vPRy61cWpW

Other supporters if the original show are not so content with the idea of a new version. 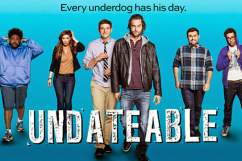