USA Network’s Graceland turns up the heat for its merry, merry band of misfits in Season 2. FBI Agent Mike Warren (Aaron Tveit) returns to the Malibu hideout to lead the team of undercover federal agents in an eight-week operation. The group whose lies become their lives will assist Mike in bringing down a string of drug cartels, one of which is on the hunt for the young agent.

Here’s what you need to know about the upcoming season:

For Mike’s efforts on the West Coast last year (bringing down Bello, investigating Briggs), his bosses back in D.C. rewarded him with a new assignment as special assistant for the deputy director back in the J. Edgar Hoover Building. His recent investigation into drug cartels will pull him back to Graceland where he’ll enlist the help of his former roommates.

No longer a rookie, our boy Mike returns to Graceland in 2 DAYS. #GracelandTV pic.twitter.com/YT6MQhU62x

Mike’s former training officer Paul Briggs will take a step back to reflect on his actions last season. That doesn’t mean his roommates won’t seek his help for some unsavory activities, Daniel Sunjata told The Huffington Post.

He is kind of looking for some redemption. He’s done some bad things for maybe justifiable reasons, understandable reasons, and he’s trying to not continue living in such a dark place, a morally ambiguous place… the curve ball in season two is that every time Briggs tries to get out, they pull him back in. Somebody in the house needs a piece of the old Briggs, or needs something done that only the old Briggs would do or know how to do, so there is that tension for him.

Last season’s cliffhanger involving the missing wire tap that indicates Briggs in the murder of FBI agent Juan Badillo will be touched on early, but take on a greater purpose later in the season, Eastin told Forbes.

I can tell you the tape becomes a very, very major player. I hope that it shows up in a way that nobody expects. I’d venture to guess nobody’s going to be able to predict how it comes back into play.

The sun-drenched crime drama will move away from last season’s (as seen above) case of the week format to more overarching stories throughout this season. Creator Jeff Eastin wanted to incorporate more of the ensemble than keeping the focus on Mike and Briggs. He told Forbes about keeping the stories in-house rather than finding the drama outside.

We really looked at it and said, “You know what? This show, it really, really feels like it needs to be serialized.” So we decided this year to really make it about the characters and we really embraced the characters welcome slogan and just really make the stories about the drama in the house.

Eastin originally hesitated bringing Graceland to USA Network, because of the show’s darker elements, like Briggs’ heroin addiction. The cable channel embraced his direction and this season “it gets very, very dark,” Eastin told TVLine.

Eastin first became aware of fan fiction on his other USA Network hit White Collar. Although not as big, he saw Graceland fan fiction writers go after the Mike and Charlie DeMarco characters before they turned their attention to Mike and Paige Arkin budding relationship toward the end of last season. East told The Hollywood Reporter his opinion on fans’ dedication to the shows ‘ships.

I’ll check it out and see what people are saying. It’s really fascinating to me and it’s an interesting subculture that arises on a lot of these shows. In my opinion, if you have people who are [taking part], you’ve made it.

The idea to pair Mike and Paige “evolved naturally,” according to Eastin. Stars Aaron Tveit and Serinda Swan had a “good, flirty relationship on set” and that worked for their characters on screen, too. The flirtations between Mike and Paige may fade when she learns he found a new woman in D.C.

For Mike, the women represent his two worlds – Jessica is colder, efficient and very much represents the ideals of D.C., where Mike believes his heart lies, and Paige represents Graceland and more of a companion presence.

While Mike’s running the show, Johnny Turturro will take over more of the undercover duties. Fun-loving Johnny wants to be taken more seriously by his housemates this year, according to The Huffington Post. The FBI agent is no stranger to the mean streets who had a brother who belonged to a gang growing up (he talks about his background in the video above). Like Mike got close with arms dealer Bello last season, Johnny will immerse himself in an undercover sting that Eastin compared to Donnie Brasco with Forbes.

The stories become personal for the characters in season two and will have them straddling the line between what’s right and wrong for a government agent. Eastin told Forbes that Swan and all the actors’ characters will “find a personal reason to at least flirt with that line.”

The stories become so personal to each one of them. Serinda, who plays Paige, in her personal life, is very involved with anti-human trafficking and anti-sex trafficking groups. So she came to me early on and said, ‘I would love to do something in that arena.’ And so, for Paige… she goes in and gets very personally involved with one of the girls in it, and that’s the thing that pushes her over that line, over the things you’re supposed to do as a good agent.

Swan started the organization Friends to Mankind in 2011 that partners with other non-profits to raise awareness and funds for educational campaigns on bettering humanity. Swan told Huffington Post about using her work to shine a light on her efforts off-screen.

It’s so nice when the two worlds come together and we can actually use the spotlight as an actor to illuminate something else in the world that’s happening. I’m fulfilled! 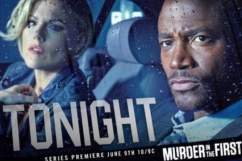 Read More
Graceland, TV
Graceland returns for a second season on USA Network, and FBI Agent Mike Warren will take charge over his mentor Paul Briggs and their family of federal agents.