We’re announcing some staffing updates at Cardiff tomorrow at 10|9c. Put it on your calendar. #HaltandCatchFire pic.twitter.com/4KHmVfvGsC

On tonight’s episode of Halt and Catch Fire, Joe MacMillan is not playing well with others. He wants Gordon Clark‘s team of engineers to create the impossible. He wants to control the project’s finances, which doesn’t make the Senior VP John Bosworth happy. And Cameron Howe won’t update him on her progress at all.

Read on to see if Joe and John can at least work through their differences to secure the capital necessary to build Cardiff Electric’s new computer in “High Plains Hardware.”

This is certainly not the day to be Gordon Clark. First, he finds a dying bird in his front lawn that he doesn’t have time to save. Then he has to go to work and fire 46 of his colleagues, thanks to the glorious new job Joe bestowed upon him last week. So when Joe doesn’t appreciate the attitudes of the men Gordon kept, the computer engineer tells him these are the men he thought could do the job.

That could have gone better. #HaltandCatchFire

Joe lays out his next grand plan to create a better personal computer. He wants Cardiff Electric’s computer to be portable, not luggable, and he wants it no bigger than a briefcase. Gordon’s “Kill Room” team doesn’t think it’s possible, but Gordon keeps working on it.

Cardiff Electric lost 60 percent of their client business in IBM’s raid last week, so Joe and John need to find new sources of capital to fund their personal computer project. The company’s CEO Nathan Cardiff would also like to stay retired and needs enough money in the business for John to keep sending him checks.

“Venture capital. Hell, I remember when it was still called money.” – Bosworth. #HaltandCatchFire

Joe takes matters into his own hands, as usual, and reaches out to venture capitalist Aaron Littlefield to invest. He invites John to join the meeting with the VP walks by, but John doesn’t like that he wasn’t invited to the lunch before. He expresses his frustrations in the meeting by putting on an exaggerated folksy charm for their guest. Aaron isn’t impressed and quickly makes a beeline for the door.

3. Donna Has to Do Her Job and Gordon’s

It seems Donna‘s boss Hunt Whitmarsh and her have an interesting history. After discussing work-related items, the two high school chums chat about her family and his wife (the title she may have had). They finish the conversation with Hunt asking her to finish a project so he can use her notes on a call the next morning.

That night, Donna comes home to do her work, but Gordon pulls her interest away with his plans on Cardiff’s new smaller and faster computer. She sees that he can shrink the size of the computer’s motherboard by splitting it in two and layering one on top of the other. Donna and Gordon, working together again!

At home the tech couple might be a team, but at work, Gordon pawns Donna’s idea off as his own (this is still a man’s world). His coworker and friendly neighbor Brian hesitates about going forward with the impressive idea though. He doesn’t think anyone can build a whole new motherboard for little old Cardiff Electric within the next three months. This deflates Gordon’s balloon. He agrees with Brian and scraps the idea.

Later when he goes to tell Joe they just can’t make his 15 pound portable computer, he has second thoughts and doesn’t go through with it. Maybe he still thinks Donna’s idea will work.

The ones and zeroes aren’t flowing for Cameron lately. Her BIOS code has come to a standstill and her interpretive dancing through the dark offices of Cardiff aren’t sparking anything new. She does run into John, who’s also putting in late hours. He asks her what she thinks of Joe, but she keeps mum on the subject. Before she leaves his office, John lets her know she’s welcome to work late hours, but she can no longer live in her office (a bit hypocritical considering he’s doing the same thing).

Anyone else know what coder's block feels like? #HaltandCatchFire

The next day, she’s aimlessly sharpening pencils to the nub until she comes across her first page check lying in a stack of papers on her desk. She quickly makes her way to the nearest bank and cashes it. She then heads to the convenience store to stock up on junk food and runs across three slacker punks. They’re looking for some food and money, but Cameron does them one better by throwing an impromptu hotel party with dancing, booze and some sketchy tattooing by one of the slackers.

The gnarly tattoo scar Cameron receives finally sparks an idea in her head, but after a three lines of code scrolled across the bathroom mirror in lipstick lead to nothing again. The only place she can think to go next is Joe’s apartment. He always seems to get her juices flowing.

Nathan Cardiff arranges for Joe and John to meet with another possible investor. This one is a local and very wealthy lady. From the moment Joe meets her though, he has no intention of partner with her. She doesn’t seem to care what the visionary salesman wants though, and asks John to have Cardiff’s lawyer to draw up papers for her to sign on with the company. To celebrate, LouLu asks her boyfriend Travis to make a few drinks for their guests. Joe sees his opportunity to harpoon LouLu’s plans and follows Travis into the den.

LouLu clearly wears the pants in her relationship with Travis, so Joe won’t try to convince him to talk his old lady down. Instead, he takes advantage of Travis’ true sexuality and starts to feel up the younger man and Travis willingly accepts Joe advances. Soon the two are passionately kissing and Joe’s stripping off his jacket. When the two return, LouLu has a sneaking suspicion of what happened in the other room. She dismisses her partnership and John’s left on the front lawn with Joe wondering what just happened inside.

Gordon’s quickly sinking back into the coward he was before Joe arrived on the scene. He realizes he needs to make one more personnel cut and it’s his friend Brian. He picks an awkward moment to do it though, after Brian T-bones another car in the middle of an intersection (they really need to cut back those bushes). Gordon tells his neighbor the bad news, exits the car and walks the rest of the way home.

When he arrives, he’s in no mood to put the chirping bird out of its misery and the tough responsibility lands on Donna. Her day didn’t end so well either when she didn’t get the report to Hunt’s office in time for his meeting. The Clark home is not a happy home at the moment. 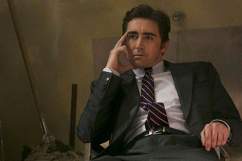