On the series premiere of AMC’s Halt and Catch Fire, Joe MacMillan arrives at Cardiff Electric in Dallas, Texas in 1983 after leaving tech giant IBM in Armonk, New York. He joins Cardiff to help with the company’s sales, but he has his own plans to create a personal computer that rivals IBM’s PCs.

Read on to see what questionable lengths Joe takes to compete against the most powerful company in computers.

Joe goes to speak with a class of future computer engineers, and finds the most interesting student is a girl name Cameron Howe. She correctly predicts (as we know now) that computers of the future will be “connected together across one network with a standard protocol,” like telephone lines. Later at an arcade bar, Joe pitches her a job opportunity and she’s almost onboard until during their sexual escapade in the bar’s basement Joe says, “This doesn’t me you get the job.” Not what the post-feminist, young, independent Cameron wants to hear and leaves Joe alone with his pants down.

The next day Joe starts his job at Cardiff Electric to not only legitimize the company’s sales force, but to blow the balls off the place, according to his new boss John Bosworth. He does just that during his first sales call with the Applied Data company and has them on the hook with an enticing speech until his associate, computer engineer Gordon Clark, speaks up with an offer for free installation. Not a good start Gordon.

2. Joe and Gordon Build a Computer

To start a revolution, you have to take matters into your own hands. Anyone out there at the start of something big? pic.twitter.com/fD3LZuHXTV

Joe confronts Gordon (who’s clearly going through the motions in his personal and professional life) again the next day with an article the computer engineer wrote on open architecture. “You wrote a treasure map,” Joe tells him. “Computers aren’t the thing, they’re the thing that gets us to the thing.” Gordon is still not buying Joe’s vision, but Joe calls him at home and even follows him and his family to the movie theater to convince him to help reverse-engineer an IBM personal computer, which is technically illegal.

Gordon’s wife Donna doesn’t want him to build another computer after their last attempt, The Symphonic, failed miserably. Joe has finally gotten to the sad-sack engineer and Gordon shows up to work with an IBM computer in the trunk of his car ready to take apart with the greedy salesman.

The two get to work in Gordon’s garage while his wife and kids are away for the weekend. Gordon explains that IBM only owns what’s on the BIOS chip within the computer, but everything else can be purchased by anyone. After 3 days of transcribing 65,356 lines of code and blowing up at least one computer monitor, Joe and Gordon succeed in cloning the IBM computer. “Now we just need to create our own chip,” Joe says, like that will be a piece of cake.

This Sunday, SHIFT your thinking to ESC mediocrity. #HaltandCatchFire pic.twitter.com/8P7moysQ6C

3. Joe MacMillan Is a Missing Person

Joe didn’t tell his new employer exactly everything about his past employment. He did work for IBM before joining Cardiff, but he left out how IBM had him registered as a missing person when he walked out on the company without a word one year ago. The computer giant knows Joe has reverse-engineered one of its personal computers (thanks to a phone call from Joe himself), and IBM plans to sue Cardiff for all its worth. Nathan Cardiff, Cardiff Electric’s owner, and Bosworth isn’t happy as anything Joe and Gordon work on off the clock is still considered Cardiff’s product.

Cardiff can’t fire Joe and Gordon or they essentially are admitting guilt on stealing IBM’s key product, so Joe concocts a plan to get out of the lawsuit that involves the company still cloning an IBM PC.

“Computers. My job. All of it. None of it matters. Not without you.” – Gordon. #HaltandCatchFire premieres June 1. pic.twitter.com/CNrnIZq4uJ

Donna returns home from work (at Texas Instruments) to find her husband has cleaned himself up and fixed their daughters’ Speak and Spell toy. She’s still not too keen on him getting involved in building another personal computer, but she gives her blessing to partner with Joe on the project as long as Gordon partners himself with her and their family.

5. Cameron Comes Aboard at Cardiff Electric

In order for Joe’s plan of avoiding a lawsuit to work, they need to hire a new computer engineer who can build a PC from scratch the same way Gordon and Joe did and knows nothing about IBM’s PC. The visionary salesman has just the person in mind. He takes Gordon back to the bar that he met with Cameron to find her freshly tossed out of after getting in a fight with another patron inside. Joe tells the 22-year-old that he’s been scouting her since they met and he wants to hire her for $20,000. She doubles the ask and she’s got the job.

The new hire has to go through an interview process with Cardiff’s lawyer about her prior experience with IBM products and any illegal tinkering she’s participated in with those products. When she starts to answer yes, the lawyer gives her a helpful “no” head shake and she answers the rest of the questions “correctly.”

Bosworth still hasn’t forgotten about Joe’s shady past and he promises to dig through it until he gets the answers he wants. That will have to wait though as IBM has arrived with their top executives and assembly of lawyers ready to take down the little Silicon Prairie company. 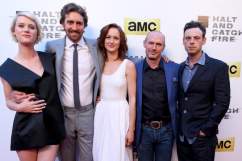 ‘Halt and Catch Fire’: 5 Fast Facts You Need to Know