Hit the Floor follows cheerleaders for the Los Angeles Devils basketball team. Season 2 aired recently, and was welcomed by a huge audience, ready to soak in the gossip creator James LaRosa has oh-so-realistically created. Read on for five things you’ll want to know about the show as it continues on its second season.

According to their Twitter fan page, the season 2 premiere of the show brought in 40% more viewers than season 1. The show’s target audience is young females who enjoy other soap-y series, but men aren’t strangers to Hit the Floor either, and I can’t blame them.

Creator James LaRosa admits that the auditioning process was brutal, and finding a star teenage girl who could act, dance, and hold her own in scenes with Kimberly Elise was no easy task.

2. Taylour Paige was a Laker Girl

23-year-old Taylour Paige, who plays Ahsha, has been dancing since the age of two. She’s had featured parts in broadway musicals and High School Musical 3, along with Debbie Allen’s Alex in Wonderland. In 2010, Paige worked as a Laker Girl, though she only spent three months with the squad. At the time, she was forced to decide whether she wanted to keep acting or not, and chose that passion as the one she wanted to pursue. She has a degree from Loyola Marymount.

3. The Deceased Director of the Cheerleading Squad was on Glee

45-year-old Charlotte Ross is a familiar face. She’s starred in “Days of Our Lives“, “The Heights“, and recently played Diana Agron’s mom on “Glee“. In Hit the Floor, Ross plays former Devil Girl Olivia. Ross admitted in an interview with the NY Daily News that she transferred certain qualities of her Glee character into Olivia to get that stuck-up-Mom aura.

I loved playing Quinn’s mother. It was like Ann Coulter times a thousand. Everything there was so well written — all these kids who thought they had it all figured out, but were so screwed up.

4. There are No Dance Doubles on the Show

If I was your devil girl the things I'd do to you! #hitthefloor pic.twitter.com/Dar8d2lnzW

The creator of Hit the Floor was recently interviewed by Urban Daily, and dished that he didn’t want any dance doubles on the show.

All of the dancers featured are dancers and all the ball players are ball players. You can tell when you’re watching a dance sequence and suddenly you spot a dance double, some guy in a wig. Our audition process is brutal – we auditioned hundreds of dancers and they had to be able to dance and look the part.

The creator also admitted that he wouldn’t be opposed to auditioning a stripper (Kyle’s character on the show is a former stripper) so long as they know ballet and contemporary dance.

In the ‘Lights Out‘ episode, Kimberly Elise and Dean Cain share a hot love scene, and Twitter completely exploded when it aired last season. Elise plays Sloane, Ahsha’s mother on the show, and is a former Devil Girl who wants to shelter her daughter from the drama and pain that goes hand in hand with being on the cheerleading team. Apparently, she was the first to sign on the show. Meanwhile, Cain plays the basketball coach– a has-been all-star player. We may be more familiar with him as Clark Kent in Superman in the TV series, Lois & Clark: The New Adventures of Superman. Right after Cain graduated college, he signed on with the NFL’s Buffalo Bills, and switched to acting when he suffered from a knee injury during training camp. 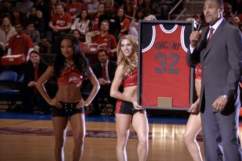