Ian Harding isn’t just one of the hottest guys on Pretty Little Liars. He’s also a huge animal rights activist and raises money for lupus in his spare time. The 27-year-old was born in Germany to a military family and attended Carnegie Mellon, where he pursued a BFA in acting and music. Less than a year after graduating, he was cast as the hunky Ezra Fitz.

Read on to find out everything you need to know about the guy who stole our hearts.

Lucy has said in multiple interviews that Ian is one of her best friends. She told DigitalSpy:

He has such a genuine, relatable quality. He’s so sweet and a loyal friend.

Hale said she and Ian constantly talk to one other about their love lives. The show’s director, Marlene King, says Hale and Harding are always joking around and teasing one another on-set. Seems like their off-screen chemistry helps them be lovebirds on-screen!

Lucy is dating country singer Joel Crouse and has been seen strolling hand-in-hand with him on countless occasions. 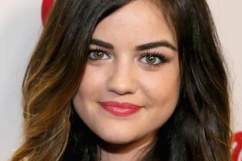 Whenever Harding is asked whether he has a girlfriend, he doesn’t give a straight answer. Multiple sources have tried to find out if there’s a significant other in his life, but Ian’s always vague. He has appeared in one Twitter photo with a mysterious brunette, and his co-star, Lucy Hale, has admitted that the two talk about who they’re dating all the time, but Ian hasn’t been seen with any women consistently.

3. He Adopted Two Dogs From a Rescue Center

Harding has two Labradoodles, Mochi and Bailey, which Keegan Allen describes as his “babies.”

Harding recently traveled to the Animals Wildlife Center in Ramona, California, with co-star Torrey DeVitto to learn more about the rehabilitation process for rescued animals. While he was there, he released a red-tailed hawk that had been living in a cage for nearly a month.

4. His Mom Has Lupus

Ian Harding’s mom, Mary, was diagnosed with lupus in 1994, after graduating with a degree in nursing from Walter Reed Military Medical Center in Virginia. Ian was 7 at the time and unaware that the disease was life-threatening. Neither side of his family had a history of lupus.

Despite the obstacles Mary faced, she continued to work full-time as a cardiology nurse at Walter Reed. She was determined not to let her illness affect her children’s lives. Mary was in full support of Ian choosing to act with his life but urged him to attend a university where he could study acting technique.

Less than six months after graduating from Carnegie Mellon, Ian got the part of Ezra Fitz on PLL. He felt guilty about his immediate success and decided to give back to the community and his mother by working with the Lupus Foundation of America to raise money for research and education programs. He writes in a Mother’s Day post on the foundation’s website:

The advocacy work I do is in honor of my mom. It’s just one way for me to say “Thanks mom!”

5. He Doesn’t Think Ezra & Ali Will Rekindle Their Romance

We were shocked when we found out last season that Ali and Ezra were romantically involved while Ali was just 15. Yes, 15 yearsold. (Does Ezra ever go for girls his own age?) Well, at least he cut things off when he found out how young she really was. Ian told Wetpaint that although he can’t decide what happens to Ezra in the show, he thinks his romance with Ali is over:

I don’t know. Who knows? The writers could have something different in store — you know, we are at their mercy — but I think that that was a total mistake, too. He thought that she was somebody else, that she was older, something like that. She came off very much like that, and then afterwards he realized: Whoa, this is bad. And so he put the kabosh on it.