Tonight was amazing as Luke Bryan and Florida Georgia Line brought Jason Derulo on stage for an insane collaboration at the 2014 CMT Music Awards. You can also check out Luke Bryan in rehearsals in the below video.

When talking about his appearance at tonight’s awards show, Derulo told Newsday:

It’s really cool, man, because I’ve always dreamed of having my music cross boundaries and enter into different walks of life. Just because you love country music doesn’t mean you can’t love other genres of music. So the fact that they thought of my song to be at the CMTs is unbelievable. I’m just really excited more than anything and I have my cowboy hat on deck.

Luke Bryan opened up about the performance run-down to CMT stating:

We’re gonna kick it off with ‘This Is How We Roll,’ and then Jason comes in and hits a little bit of ‘Talk Dirty.’ What’s funny is that I’ve been just kind of singing that — just cuttin’ up at the end of ‘Country Girl (Shake It for Me)’ — out on the That’s My Kind of Night tour. … I just think it’s a fun dance song. It’s kind of like the hip-hop version of ‘Country Girl (Shake It for Me). 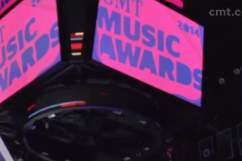