Jimmy Kimmel opened the NBA Finals featuring the Miami Heat and San Antonio Spurs with a special edition game night of Jimmy Kimmel Live. He plays a remixed version of Marco Polo with Dikembe Mutombo, goes one-on-one with Stephen Curry and talks with Martin Lawrence about his favorite NBA players.

Read on to see how Kimmel measured up to his athlete and celebrity guests on Jimmy Kimmel Live: Game Night.

Kimmel cut into his monologue to play a version of the popular swimming pool game Marco Polo with Dikembe Mutombo. Blinded by a black mask, the late night host shouted “Dikembe” (instead of Marco) and followed the eight-time NBA All-Star’s response of “Mutombo” (instead of Polo) up and down Hollywood Boulevard. Mutombo hid in plain site, not hard for the 7-foot-2-inch tall Congolese American, by sticking his face through a pizza pie and dressing up as Chewbacca.

Kimmel calls out for blocks down the Hollywood Walk of Fame, but he still can’t tag Mutombo so he puts up flyers and then ends up filing a missing person report at the police station. He doesn’t need to look much longer when he realizes he’s sitting in Mutombo’s lap.

Lawrence has two basketball courts (an outdoor court at his mother’s and an indoor court at his home in Virginia), so Kimmel invited him to stop by the NBA-themed program to talk about the pick-up games he plays with his good friends. (He also had his new FX series Partners to promote.) Unlike most of the country that wants the San Antonio Spurs to defeat the Miami Heat and ruin the chance of a three-peat, Lawrence picked Lebron James, Dwayne Wade and the rest of the Heat to win the finals.

Heat fans better hope James plays better in the best of seven series than he did in a game of H.O.R.S.E. against Lawrence’s brother, who beat the MVP player at the shoot around game.

3. Don’t Turn Off the Game If Tracy Morgan’s Cousin Is Watching

Tracy Morgan made the mistake of turning off an NBA Finals game between the Celtics-Lakers, and his cousin Randolph was not happy. Tracy got nailed in the face with a two-liter of Mello Yello and woke up later with his cousin’s dog licking up the citrus-flavored soda that spilt all over his stomach.

4. Kimmel Beats Stephen Curry in a Equalized Game of One-on-One

Kimmel knew he couldn’t beat NBA All-Star Curry in a basketball game of one-on-one without leveling the playing field. Before hitting the hard court, Curry spun the “EqWHEELizer” to keep the game fair between him and Kimmel. He spun pass sitting in an office chair, wearing bubble wrap and wearing Hulk hands to land on riding a tricycle.

The trike tipped the scales in the host’s favor as he beat Curry 3 to 1. Kimmel used his drive skills to outshine Curry shots from downtown that only fell once.

Kimmel continues the fun after Game 1 of the finals when he’ll take on the Scripps National Spelling Bee co-champ Sriram Hathwar. Jimmy Kimmel Live starts tonight at midnight on ABC. 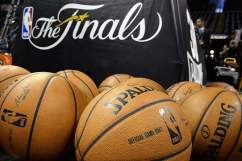