In the season premiere of the last season of True Blood, we’ll see Joe Manganiello’s six pack as his character Alcide has a love scene with Sookie.

The 37-year-old actor, who happens to be newly single, is making a name for himself- and his body-in Hollywood.

Let’s look at his career and personal life.

1. He Had a Sex Scene With Anna Paquin

In the above trailer for the final season of True Blood, at the 1:05, we see his character of Alcide Herveaux passionately kissing Sookie, played by Anna Paquin.

Moyer assured EW that he doesn’t mind in the least. “There are moments where I’ll be watching the monitor [and say] ‘Oh, Joe, just move your hand up towards Anna’s breast.’ And can you move your thumb just a little bit towards her nipple? Great,” he said.

Manganiello told E about the show coming to an end this season:

It’s sad to say goodbye to the character and the show…It really was an amazing experience for everyone who worked on it.

They start shooting the sequel to the hugely popular Magic Mike this fall, and Manganiello couldn’t be happier. “It was the most fun I’ve ever had, and I can’t wait to get back in and mix it up with those guys,” he told Collider.

The sequel follows the male strippers on a road trip, and Manganiello is back as Big Dick Richie.

He told Variety, ““I never thought my career would take a swing in male entertainment expert, but somehow I’m there.”

3. He Went Through a Breakup & Is Now Single

Manganiello met his ex girlfriend Bridget Peters at a Vegas boxing match. The model was a ring girl there.

On the Today Show, he explained that he’s still looking for love:

The actor works out twice a day, six days a week, and it shows.

In an interview with the Huffington Post, he shared what he eats to keep his ever-present six pack:

In 2012, he was recognized for being one of Men’s Health’s 100 Fittest Men of All Time alongside Arnold Schwarzenegger, Michael Jordan, Bo Jackson, Michael Phelps, and Carl Lewis.

For the release of his book Evolution in 2013, he made the above video.

In the video featured above, Manganiello joined Hulk Hogan and Arnold Schwarzenegger at Monday Night Raw in March.

See the photos the WWE website put up here.

Manganiello costarred with Schwarzenegger in the 2014 film Sabotage. 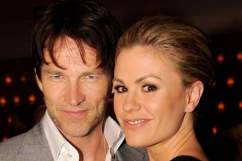