It has recently been announced that Lucasfilm and Disney have selected their chosen film director for a future stand-alone, spinoff Star Wars film – Josh Trank. There’s a lot of information surrounding Trank, his past movie accomplishments and future work with the Star Wars movie franchise.

Here’s everything you need to know about a film director that Star Wars film aficionados will definitely want to get familiar with.

1. Josh Trank Will Be Handling the Directing Duties for Another Star Wars Spinoff Movie

We’re thrilled to welcome Josh into the family. He is such an incredible talent and has a great imagination and sense of innovation. That makes him perfectly suited to Star Wars, and for this new slate of movies that reach beyond the core characters and storylines of Episodes I through IX.

Josh Trank also spoke on his adoration for the series:

The magic of the Star Wars Universe defined my entire childhood. The opportunity to expand on that experience for future generations is the most incredible dream of all time.

2. Josh Trank is Also Working on the Fantastic Four Reboot

Josh Trank is also working on another huge blockbuster film – the planned Fantastic Four movie reboot for 20th Century Fox. Simon Kinberg will be writing the screenplay, while the actors listed below have been selected for the film’s main characters:

• Kate Mara as Sue Storm aka “The Invisible Woman”
• Miles Teller as Reed Richards aka “Mr. Fantastic”
• Jamie Bell as Ben Grim aka “The Thing”
• Michael B. Jordan as Johnny Storm aka “The Human Torch”
• Toby Kebbell as Victor Von Doom aka “Dr. Doom”

Josh Trank is most famous for directing the 2012 sci-fi hit Chronicle. The film’s budget was reported to come in at $12-million. Trank also worked on a TV series called The Kill Point (2007).

4. The Director of Godzilla (2014) Will Be Directing Another Spinoff Star Wars Film

The other director who has been selected to direct a separate Star Wars stand alone film is Gareth Edwards. Gary Whitta has joined Edwards as the official screenplay write for this film. It has been slated to release on December 16, 2016.

J.J. Abrams is working hard on filming Star Wars: Episode VII, which just wrapped up its 1st location shoot in Abu Dhabi. Check out the full list below to check out the actors and actresses who have been announced for the film thus far: 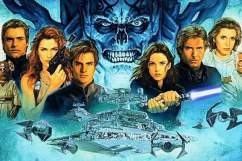