Third time’s a charm for Melissa Etheridge who married her long-time best friend Nurse Jackie co-creator Linda Wallem on May 31 in Montecito, California. It’s the first official marriage for both women.

Here’s what you need to know about Wallem and her life with Etheridge.

True love…so blessed. "By the power invested in me by the state of California…" Thanks pic.twitter.com/rWftMxdxQv

The couple’s wedding ceremony took place at the ranch in the lily garden. Etheridge wore a grey suit and Wallem carried a bouquet of purple and white flowers down the aisle in a white, sparkly dress. Invited guests included Rosie O’Donnell, Chelsea Handler and Whitney Cummings.

Etheridge announced her plans to wed the TV writer/producer when the Supreme Court struck down the Defense of Marriage Act (DOMA). She tweeted on June 26 that she looked “forward to exercising my American civil liberties.” Etheridge was previously in two committed relationships with Julie Cypher (1990-2000) and actress Tammy Lynn Michaels (2002-2010).

A gorgeous, perfect, beautiful day to get married. #shoesonlylove pic.twitter.com/dJO1izoTB2

The two women started dating in 2010, but had been best friends for more than 10 years, according to People. Etheridge even asked Wallem to be her “best woman” at her commitment ceremony to Tammy Lynn Michaels.

Etheridge and Michaels went through a nasty custody battle after their 2010 separation over the couple’s twins daughter Jonnie Rose and son Miller Steven. They settled in January 2013 for joint custody. Michaels also saw Etheridge through her battle with breast cancer.

Linda and I had a great birthday yesterday. Now, just a little rehearsal for something we will be doing tomorrow…? pic.twitter.com/rn3zLyLkbQ

Etheridge and Wallem were both born on May 29, 1961. They celebrated together two days before their wedding on Saturday.

4. Wallem Thinks Being a Lesbian Is an Advantage Working in Hollywood

Wallem arrived in Hollywood in the early 1990s working on shows like The Carol Burnett Show and Seinfeld, and acting in Sleepless in Seattle. She didn’t share her sexual orientation with some of the men she worked with though, she told AfterEllen.com in 2009.

“There were some guys I had worked with that I didn’t care to share that with because, you know … I don’t know. Maybe being a lesbian in TV, people look at you like you fit into the boys club a little. Actually, I think it’s an advantage because it is such a male-dominated industry. I think that’s why straight men love lesbians – because we can be great friends.”

Wallem went on to write for Cybil, That ’70s Show, and created the Showtime series Nurse Jackie in 2009 starring Edie Falco.

5. Wallem Made Her Brother Audition for ‘Nurse Jackie’

It’s nice to know someone in the business, and Stephen Wallem found that person in big sis Linda. She still made him audition for his role as Thor Lundgren on the Showtime series. Stephen is also gay and Linda credits her “supportive family” for both to come out to, she told The Advocate. 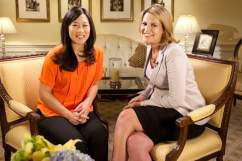