Adam Levine came onto the Today Show with his band Maroon 5 this morning to not only perform, but to talk about his film acting debut in the movie Begin Again. Levine’s character in the film becomes “a jerk” and actress Keira Knightley said that Levine plays a jerk quite well. Check out a scene from the movie in the below link: 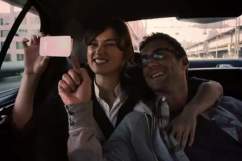 WATCH: Keira Knightley Breaks Up With Adam Levine in a Song

I genuinely believe you have a good voice What @adamlevine says he told Keira Knightley when she sang in #BeginAgain pic.twitter.com/hDdRy30g9V

Prior to his performance, Levine talks a little bit about his interview with GQ and how he’s a little bit cocky, but is very grateful for the life he has. Finally, Maroon 5 busted out their new single “Maps” for the crowd … And, as a big announcement, Levine let the crowd know he’s coming back to the Today Show September 1, 2014 for a big concert.

Following the #MAPS to @maroon5 on @TODAYshow… pic.twitter.com/nPudaQ1q2C

'No one liked it' – @adamlevine to @SavannahGuthrie on his formerly-blonde hair. Did you like the look?