Marquis Lewis has been identified as the man who was involved in a physical altercation with Brittny Gastineau, according to TMZ. Read on for the facts on Lewis and the attack that resulted in a black eye for Gastineau.

Gastineau was spotted out to dinner with a huge shiner after reportedly being attacked at the London Hotel. The police became involved in the incident after doctors at the hospital where Gastineau had checked visited, felt it was a domestic violence situation.

Marquis Lewis is actually a famous street artist who is also known as Retna and you can view his artwork by clicking here. Retna’s bio on Art Net reads:

Contemporary Graffiti artist Retna (American, b.1979) was introduced to the Los Angeles mural scene at an early age, and has lead one of the largest Graffiti Art collectives in the city since he was in high school … The artist has exhibited at venues throughout the world, with shows at L.A. Art Machine in Los Angeles, CA; Don Gallery in Milan, Italy; Yves Laroche Galerie d’Art in Montreal, Canada; and Art for All in Malaga, Spain; among others.

Lewis chose his artist name in 1996 from a Wu-Tang Clan lyric and his signature style is:

a distinctive constructed script which is derived from Blackletter, Egyptian Hieroglyphics, Arabic, and Hebrew calligraphy, as well as more traditional types of street-based graffiti.

Retna has produced work for brands including Nike and Louis Vuitton.

3. Gastineau And Lewis Were Dating 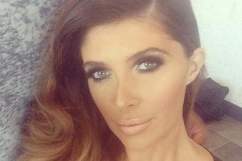 Apparently, Gastineau and Lewis were actually dating and Lewis was recovering from surgery when the altercation occurred. TMZ reports:

Marquis Lewis — a famous street artist who goes by the name Retna — was dating Brittny. He had checked into the London Hotel in West Hollywood a week ago Monday to recuperate from major knee surgery — surgery that had just been performed.

According to Lewis’ lawyer Michael Goldstein, Gastineau and Lewis have no hard feelings. In fact, the fight was supposedly a mutual attack.

Goldstein says his client was almost defenseless from the physical attack because he was unable to walk without crutches. Goldstein says there was lots of swinging, and in the end Retna was also seriously injured — his face and eye were swollen, his painting hand was injured and his ear was cut up.

5. Friends Have Reached Out to Gastineau In Regards to Her Fight with Lewis

The naked eye does not foresee pain but the heart knows how to regulate future destruction thru courage. @brittgastineau

Malika Haqq, Khloe Kardashian’s BFF, sent a heart-warming tweet out to Gastineau in the wake of the fight. It sounds like Gastineau has a lot of support from friends coming her way.