In the new series Mystery Girls, Miguel Pinzon stars as Nick, a super fan of Jennie Garth and Tori Spelling back when they played detectives on TV.

He witnesses a murder and demands their help on the case.

He describes himself on his Twitter profile as “the happiest third wheel” on the new ABC Family series.

1. He Says He Has a Lot in Common With His Character

Nick’s described on the show’s site as “gay, vibrant, and new to Los Angeles.”

He dished to ABC Family:

We’re both new to Los Angeles and we’re both sort of outsiders in this world, in the sense that he plays a super fan to the two girls and cannot believe that his life is what it is. He’s working alongside his idols. And like myself, I cannot believe I have a job, that I’m serious actor. It’s mind blowing to me, it’s my first rodeo and I’m over the moon.

The actor is enjoying his new role:

I think were both on that same emotional journey, like ‘Oh my gosh, I cannot believe my dreams are coming true!’ Those moments when you’re geeking out just seeing it all happen, and then there’s moments when you’re there and you’re in it and it’s fantastic.

Spelling and Garth played Donna and Kelly for all 10 seasons of the popular 90’s teen drama, Beverly Hills 90210.

Pinzon watched the show, and went through their experiences right with them.

He said, “Donna Martin and Kelly Taylor are very specific people to me. Donna Martin at prom, the stalkers they had, all those things, I went through the emotional toll with them.”

Now, he gets to work with them, and is excited to get to know them as people, beyond their iconic characters:

So to actually have these two actresses, who have such iconic characters and then to meet them in a very real way and to see beyond those characters, has been an absolute delight.

3. Since He’s Latino, They Changed His Character’s Last Name

In the original script, Nick’s last name was Doyle.

Pinzon is grateful for the name change, saying, “…I like to give props to the writers for honoring my Latino blood memory and changing his last name to Diaz.”

The video above is his acting reel, which includes roles in Law & Order: SVU and 30 Rock.

5. He Gave Us a Backstage Tour

Pinzon asks Garth what’s the one thing she’d bring on a desert island. Her answer: “Lipstick!”

The actor also brings us into the wardrobe room, filled with plenty of fancy and fun shoes. 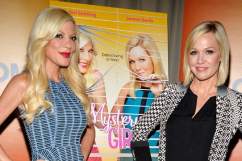