On tonight’s episode of Mistresses, Savi returns to work and has to deal with the new associate Toni who doesn’t make it a secret she has the hots for Dominic. Karen can’t stop her flash backs to the day Elizabeth Grey took her captive when she learns the unstable woman is up for release from her psychiatric hold. April and her sexy, smoldering artist perform some colorful art, and Joss struggles to work with her new partner Harry.

Read on to see how the ladies navigated their way through another drama filled evening in “Boundaries.”

Savi has some competition on her first day back at work, not only for her job but her man Dominic as well. Dom tells her she has nothing to worry about, but Savi’s not entirely convinced. It doesn’t help when Toni inserts herself into a meeting with big name client, sings aloud in their shared office and confesses she’s “gotta get me some of that” in reference to Dom.

Who is this girl?! #Mistresses

Dom tells Savi that the two will need to work together for the new client Andre Breitling (Rudolf Martin). That won’t be so easy with Toni after Dom, but again he claims Toni’s wants are meaningless to him. Not what Savi wanted to hear, as she’s afraid she can’t trust her new beau and that the two are both capable of deceit (she cheated on her husband; he slept with a married woman).

Who is this girl?! #Mistresses

Later, Savi comes back to Dom to apologize, but he admits that she was right about him not seeing the whole picture. They agree to focus on why they chose each other when it wasn’t the easiest thing to do in the first place. The couple seal it with a kiss, but not so smart doing it in the office, even with the door closed. Someone is always watching, and in this case it’s Toni.

Savi and Dominic steal away to his office (things are a little crowded in hers) to prep for the potential new client Breitling, but when they emerge for the meeting, they find Toni flirting with him. Apparently he’s responsible for some her best international love affairs, and he repays the favor by inviting her to the meeting. Obviously, Savi is less than thrilled for the change in events.

She can’t believe when Breitling requests Toni on his legal team as part of his deal to become a client for their firm. She’s also not thrilled with the way she made Dom look like a fool in front of their new client.

3. Karen Keeps Flashing Back on Captivity With Elizabeth Grey

Karen thinks her biggest problem of the day is a vindictive nurse stealing her counseling space. Dr. Blakeley soon informs her that Elizabeth Grey is up for release from psychiatric care and a flood of painful memories from the past year soon consume Karen’s every thought. She can’t concentrate during her session with new patient Anna and can’t stop replaying the events from the day Elizabeth took her hostage.

The therapist doesn’t want to testify at Elizabeth’s hearing, but Savi warns her (in the video below) that not attending will look like a vote of confidence for Elizabeth’s release. She knows her friend is still scared, and that’s exactly why Karen needs to testify.

Karen ultimately chooses to meet with review board. She runs into Elizabeth before the review, and she seems to be doing better. She apologizes to Karen for her actions and confesses her greatest punishment will be living with the guilt of murdering her son. She only wants to visit Sam’s grave, a request the hospital wouldn’t grant the grieving mother. Karen lets her know there’s always flowers.

Karen lets her friends know she’s no longer afraid of Elizabeth, but it doesn’t hurt the board rejected her release.

Harry and Joss in business together: Good idea or bad idea? #Mistresses pic.twitter.com/1FWRjiAV3w

Harry proves a welcome partner for Joss when he brings in his first client, Janine Winterbaum, but they have a tight deadline of 24 hours. When Janine’s other party planner dropped out unexpectedly, she thought of the Australian chef and how much she missed “tasting Harry” (so to speak of course). Joss doesn’t appreciate Harry taking over control of the party, while she runs like a chicken with her head cut off trying to accommodate all of Janine’s demands. The lady needs her poofs and votives.

Joss does not look happy. #Mistresses

Harry’s frustrated with Joss failing to pick up all the items Janine asked for, but all works out in the end. Turns out Joss’ choice of carved stools from April’s shop rather than the poof seats was perfect. Janine’s going to give the two a rousing testimonial, but Joss still isn’t happy with Harry’s behavior.

Harry finds Joss the next day to apologize, (first, he awkwardly interrupts coffee with her, his ex-wife and the girls) but he’s misread the situation. He thinks Joss is mad over him freaking out over the stools, but quickly informs him it’s because was mean and bossy. She gives him an ultimatum to work as partners and not as her boss, and of course, he accepts.

5. April and Daniel Create a Sexy, Colorful Piece of Art

April‘s not particularly proud of her rendezvous with the sexy, smoldering artist Daniel, but she has to return to the scene of the crime to retrieve her earring. Again, she can’t resist those incredible abs and immediately jumps him in the doorway of his loft.

The steamy couple spends the next 48 hours together. He feeds her a spicy meal, but she can’t help find the ridiculousness of their new relationship. She barely knows him and now he’s feeding her, but he quickly reminds her that’s the least of his offensives so far.

He proves it in a very colorful way. Feeling artistically inspired, he dips her fingers in a jar of red paint and wipes them across the canvas. He adds more colors and uses April’s lascivious body as his paint brush.

That is some SEXY art. #Mistresses

The next morning, she finally learns a little something about her mysterious man. The revealing moment is short lived when she mentions she needs to pick up her daughter. He then tells her he’s going out of town for a week or so, and Joss confirms for her later that he won’t be calling any time soon. Wrong this time Joss. Daniel sends her a note to await his call along with their intimate painting. 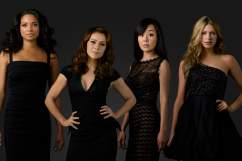