Ed Sheeran‘s career hangs in the balance. His second studio album, x (pronounced “multiply”), drops June 23, and the whole world is watching this time. MTV follows the English singer-songwriter as he navigates his rapid ascent to pop stardom in the new music documentary Nine Days and Nights of Ed Sheeran, airing June 10.

Here’s what you need to know about MTV’s intimate look at the ginger-haired performer.

1. The Release of Sheeran’s Next Album Is a ‘Make or Break Situation’

In Sheeran’s short career, he has garnered a dedicated fan base called Sheerios and big-name backers like Jamie Foxx, Elton John and Taylor Swift.

He acknowledges in the preview for MTV’s documentary that after his successful debut album, +, he will have a lot to prove with his second album:

I never thought I’d be in the place that I am now. After such a successful first album, it’s literally a make or break situation.

2. Sheeran Collaborates With Pharrell Williams on the New Single ‘Sing’

Pharrell Williams tells Sheeran in the MTV special that the first time he met the young artist from Framlingham, Suffolk, he knew he wanted to get in the studio with him. The Grammy-winning producer did just that with Sheeran’s hit single “Sing.” The song gave Sheeran his first number one single, topping the UK Top 40 charts on June 8.

Sheeran told OfficialCharts.com about having his first chart topper in his home country:

It’s fantastic! It’s nice to finally have a Number 1 in my home country. Thank you to everyone who supported the single for making this happen.

Sheeran opened for Taylor Swift on her 2013 Red tour, and the two quickly became best friends. She immediately noticed his voice and says in the documentary that she’s “never been more jealous of anything in my life.”

Elton John gives his fellow Brit a pep talk in the special, something he also does in weekly phone calls to Sheeran. The legendary performer noticed Sheeran’s talents early on and even suggested the two duet at the 2013 Grammy Awards, Sheeran told MTV News:

[John] put it together. He rung me up one day and said, ‘How would you feel about performing with me at the Grammys?’ I was like, ‘I’ll check my schedule.’

4. He Revealed 100 Facts About Himself in an MTV Special

In anticipation of the music television documentary, Ed Sheeran shared 100 facts about himself in the MTV special 100 Things About Ed Sheeran. The Ginger Jesus used to have the embarrassing nickname “fire crotch,” and he totally rolled with it when tourists mistook him for Harry Potter star Rupert Grint.

Sheeran performed his first concert at age 11 (see pic from that night above), and he returns his old stomping grounds in the special. He also meets up with old friends, including one young woman who returned home to become a teacher while Sheeran “went off to become a famous pop star.”

“Going home, where I grew up, gives me a sense of stability,” he says in the documentary preview (scroll up to see video). 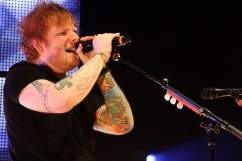