In this episode of Orange Is New Black, Piper finds out who Larry slept with, Vee expands her control, and Nikki thinks about returning to drugs.

Read on to see what happened in Season 2, Episode 10, titled “Little Mustachioed Shit.”

1. Piper Finds Out About Polly & Larry

Piper receives another letter from Alex, but she doesn’t immediately throw this one away. In flashback, we see the beginning of Piper and Alex’s relationship and Alex wasn’t so single when they first started going out. Alex’s then girlfriend Sylvia didn’t appreciate Piper in bed with Alex, and left a bag of flaming poo on her doorstep when Alex left her for Piper.

Fast forward and Piper’s doing the same thing. This time she has her sister-in-law leave a bag of burning dog crap on the doorstep of her best friend Polly, when Piper figures out that she slept with Larry before they broke up.

Vee and her black crew start making moves to expand their business to every sector of the prison, and their eyes are next set on Poussey’s library. Vee also takes a look into how Red is moving her contraband into the prison, and finds a tunnel under the greenhouse. Vee suggests she and Red become friends again like the old days, but Red’s not falling for that one again (last time she ended up in a pool of her own blood in the middle of the kitchen).

Poussey has other ways of dealing with the tight squeeze her group is putting on, and grabs her secret stash of hooch from the library ceiling. After getting sick on the stuff in the bathroom, Poussey focuses her drunken rage on Vee and dives at her. But Poussey is outnumbered, and Crazy Eyes put a beat down on the defenseless drunk in the showers.

3. Nikky Resists the Urge of Drugs

Gina confronts Nikky about the drugs, but Nikky denies it. Gina’s keeping a close watch on Nikki and Gina wants her to take the drugs to Red.

Nikky takes the drugs out of her hiding place again. This time she opens the little baggie for a sniff and a lick. Fortunately she has second thoughts, and gives the drugs to Red. Nikky tells her that she got the drugs from Tastey who got it from Vee. Red is proud of Nikki.

Gina comes by and tells Nikky that she’s proud of her.

Nikky helps her girl Lorna feel better after her so-called fiance shows up for a visit. Turns out they only went on one date and Lorna got super obsessed. She even risked driving the van off of the prison grounds to break into his home. He starts yelling at her in the visiting room and Nikky sees the whole thing.

Lorna is afraid no one will ever love her, and Nikky assures her that she always will.

Figueroa finds out about the newsletter. Caputo tells her about Mendez impregnating Diaz, and she was the one who brought him back after suspension. They call Diaz in to make her confess about Mendez’s rape. She admits she encouraged the guard and Figueroa tells her to keep her legs shut from now on.

Diaz tells Bennett that Mendez is going to jail. She doesn’t care if Bennet goes to jail, because at least they’d be even.

Caputo talks with Mendez. He still can’t get the image of Mendez’s bare butt out of his mind. Caputo tells Mendez he got Diaz pregnant and that he’s fired. Mendez takes it rather well, saying he understands and doesn’t put up a fight when he gets arrested.

The press shows up to see Mendez out. Figueroa goes in front of the cameras saying that they are doing everything in their power to take care of the young woman who “is the real victim.” Mendez starts yelling that he’s coming back for Diaz and he will take care of both her and the baby.

5. So-So Goes on Strike and Healey Starts a Support Group

So-So goes to the white table to get help in her strike, and no one is signing on. Yoga lady sits down with So-So to join the hunger strike because her friend has been taken to the SHU twice now. She compliments So-So on being a true activist.

Healey tells his therapist about his mail-order bride. He claims he doesn’t need her help anymore and that he really helps people all day long. Remember he’s helping Pennsatucky, and even uses the term “projection” on her. He wants to start a support group and recruits her to get the word out.

In other news, Sophia made a big step with her son Michael when he visited her for the first time in prison. He didn’t have much to say, but they did trade some wholesome trash-talk over a game of Fish. 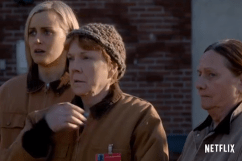 Find coverage of every episode in Orange Is The New Black‘s Season 2 here.