There’s nothing better than hearing a bunch of female inmates talk about love for 45 minutes when they’re not even exposed to the outside world. This episode starts out on Valentines Day, and all the inmates talk directly to the camera about their experiences of being in love. We also get to explore Poussey’s background, and the role her sexuality has played in her convoluted past.

1. Polly and Larry Make Out and Pete Almost Catches Them

Towards the end of the episode, and to piss Piper off, Larry runs up to Polly and kisses her. Pete catches up to them and JUST misses the make out, as they both try and act like nothing happens. He then joins the couple on their Valentines Day night, as Pete stays blissfully unaware of the situation.

2. Poussey’s Lesbian Past Is Exposed

In a series of flashbacks, Poussey falls in love with a girl while she’s abroad with her military family. The whole episode slowly explains her relationship with another girl who we think is her first love. When the girl’s father walks in on them in a steamy sexual act, the two are left mortified as to what’s gonna happen next. Soon enough, Poussey finds out her dad has been transferred back to the states, and they have to move away. She’s devastated– she had no plans of leaving her lover. She then aggressively confronts the girl’s father, but her own dad comes in and silences her.

Larry wants to write an article about financial irregularities– ie buildings that were never built. He asks Piper to spy from the inside and investigate for him. She gets pissed off and yells “You’re doing it again. You’re the moon, you have got to stop being the moon.” The two spin off into this metaphorical argument about the solar system that is both funny and depressing all at once… and it clearly exposes the deeper issues and resentment they feel for each other after everything that’s happened.

Piper does, however, go on to ask a bunch of questions about the prison’s facilities, and Healy calls her out on it once he realizes she’s asking everyone all these questions. “Freedom of the press should not only be a privilege of the free.” Piper tells Healy she’s starting a prison newsletter– one written by the prisoners with oped pieces. She makes this all up on the spot, of course, but it seems the improvised story is one she may come to think could be a good idea. Healy’s actually into the whole thing and fall for her act, though– he wants the girls back to like him again.

4. Fischer and Caputo Go On a Date

After some flirting over the dramatic lives of inmates, Caputo asks Fischer how her love life is and she basically says it’s nonexistent. He then proceeds to flirt harder with her and asks her to come watch his show… she has to cover the Valentines party, but he says he’ll get her shift covered. Seems like the two are going on a date.

In the end, it doesn’t go well for Caputo though. He clearly likes Fischer but she may not be as into him, seeing as she invited other coworkers to the event.

“We are done with you.” Leanne kicks Pennsatucky out of the ‘leader-of-the-pack’ role. She and the other white girls in their clan want a democracy and aren’t into the dictatorship Pennsatucky has built. It seems Leanne’s in control now and has appointed herself the new queen bee. She asks another chick to get her some punch, and the woman eagerly agrees to. Uh-oh. 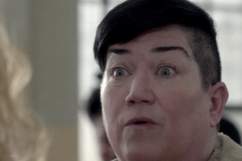