The back half of Orange Is the New Black‘s second season puts the flashback spotlight on Black Cindy and her life before winding up behind bars. The former TSA agent needs to learn her place in Vee’s new hierarchy before she’s cut out of the black women’s cigarette operation entirely.

Read on to learn more about Black Cindy’s backstory and what else happened in the episode “Comic Sans.”

Vee hasn’t wasted any time assembling her new crew, and she has them rolling thin cigarettes (filters are a waste of supplies) to sell around the prison in return for stamps (forever stamps preferably). All the black girls takes a stash of the cigs, discreetly hidden in tampon boxes, to sell except for Suzanne/Crazy Eyes who “makes people feel uncomfortable.”

Black Cindy notices Vee is making out the best in this deal, taking 90 percent of the profits, and decides to trade her supplies of cigarettes for cleaning services and food instead. This doesn’t make the boss happy and threatens to move Black Cindy to production with Crazy Eyes.

After some reflection, Black Cindy goes back to Vee (who’s teaching Crazy Eyes how to play chess) to ask for her job back. She won’t have to roll the cigs, but she won’t get her sales position back either. Instead, Black Cindy will have to deposit the cigarettes in the used tampon applicators out of the trash. Disgusting, we know!

2. Black Cindy Had a Government Job Out at the Airport

Black Cindy isn’t used to the responsibility Vee demands of her, even when her life before prison including working for the TSA. She took advantage of her position driving recklessly through the airport, grabbing candy bars off the gift shop shelves and feeling up the good looking men who passed through her security line.

She also put off her responsibilities to her daughter Monica, who thinks Black Cindy is her older sister. Monica enjoys any time she can spend with her “big sister” and the gifts she receives, like a new iPad (illegally confiscated from a suitcase that Black Cindy handled).

Given the events on Valentine’s Day, Caputo institutes a new policy of a higher shots quote for his correctional officers. The prisoners don’t need to do much to get written up, like Big Boo kicking an empty chair or Sister Ingalls trying to sneak a piece of cornbread out of the cafeteria again.

Assistant prison warden Natalie Figueroa needs to whip her prison into shape, especially with her husband running for office. She wants to make a real change in the prison system, with better sentencing laws, but she instead she has to deal with ridiculous request for new shower heads and loofas for the women. Her husband says they can make those changes when he gets elected, but talking about it won’t get him elected. (Did anyone else sense something between her husband and the candidate aide? Maybe that’s why Natalie’s not getting any loving from her hubby.)

4. Bennett Puts an End to Blackmail From Daya’s Crew

Using the guard’s new shots quota, he starts writing up Daya’s crew and when they still don’t behave he hauls them off to the SHU. That goes for everyone except for his baby mama, who he can’t bring himself to punish in that way.

In other correctional officer gossip, O’Neil apologizes to Wanda and offers to move in with her. She can’t resist her big “Panda” and the two start making out in the bubble.

5. Piper Features Caputo in the Newsletter

Piper Chapman channels her efforts into a newsletter for the prison called the Big House Bugle. Daya joins as a political cartoonist (she makes Healey a walrus) and Lorna writes a beauty column (did you know coffee grounds can be used as an eye shadow?).

Someone needs to share the news to Chapman that her estranged fiance Larry cheated on her with best friend Polly. Guess that will have to make the next issue.

The reporter visits Chapman to gather more information on the missing funds that were allocated to the prison last year. Chapman tries to help with a visit to Caputo, and butters him up with a front page profile story in the newsletter’s debut. It’s not known what worthy information she collects except that Caputo owns a turtle, not a bird like Lorna would have thought. 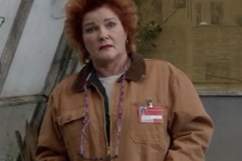