On this episode of Orange Is the New Black, the prison releases Piper Chapman for 48-hour furlough and the history between Red and Vee is revealed.

Read on to see what else happened in the episode “40 Oz of Furlough.”

1. Piper Chapman Goes to a Funeral and a Wedding

Secrets don’t stay hidden in families for long, and Chapman’s is no different. While receiving mourners after her grandmother’s wake, all the relatives want to hear about her life in the big house. Everyone, including her father who hasn’t visited her in prison yet, believes she’s still the innocent, overachiever, do-gooder, but she has to break it to them that she’s none of those things anymore.

Chapman’s brother takes the spotlight off his big sister for a while when he announces that he’s going to bring some joy to his grandmother’s funeral with a wedding. Given that all his family and friends are in one place already, he calls his fiance Neri and their recently ordained buddy to the front of the chapel to perform the ceremony.

After the funeral/wedding, Chapman steals away to a convenient store across the street. She grabs a forty of liquor and a burger and sits alone enjoying her last few hours of furlough.

2. Red Makes Right With Her Family

Red goes on a shopping spree at the commissary and she informs Nikky to gather all the girls (the caucasian crew, of course) in the greenhouse at dinner time for a special surprise. For Red’s sake, that surprise better include some apologies from the flaming-haired Russian.

To gather the rest of her supplies from Gloria and the kitchen, she sends her senior citizen posse to collect and don’t underestimate these ladies based only on their age. The one woman’s husband who is missing a very important member of his anatomy can attest to that fact.

Red wasn’t always the pushy, dictator-type that her fellow prisoners have seen up to this point. In early flashbacks of Red’s arrival at the prison, the bossy red-head is a shy newbie who thinks she’s found a friend in another new prisoner Yvonne “Vee” Parker, who is an old pro of the system even at that time.

She confides in Vee about her connection with the supplier Neptune fruits and vegetables and Vee suggests she used that to her advantage. Red does just that and starts bringing in contraband through Neptune deliveries. But once Vee sees how well Red’s business is going, she wants in on the action. When she doesn’t get her way, she has her black crew kick and beat Red to a bloody pulp on the kitchen floor. Her best friend silent Norma can do anything but look on in fear.

Nikky assembles the family (sans Chapman) together in the greenhouse for a special dinner prepared by Red. Red apologizes for her past behavior, in particular Gina’s grease fire accident and to her best friend in the prison Norma. Big Boo even gets a shout out: “Thanks for always being a pain in my ass.” She tells the women she’s willing to work more as a democracy from now on.

Big Boo enjoys Red’s cooking but then quickly goes behind her back when she discovers Red’s secret contraband tunnel under the greenhouse. She takes this information to Vee with the stipulation that she receive at least 20 percent of the tobacco sales.

3. “Mendez Is Back Bitches”

Mendez busts in the door and starts writing up shots immediately. Bennet is not happy and takes it to Caputo immediate. He picks on the Asian inmate Brooke So-So (the vegan) who then tries to stage a hunger strike. Bennett tries to man up more by striking a table to get the ladies to settle down.

Penssatucky tells So-So that the prison doesn’t care about conviction. LeAnn strikes up friendship with So-So and tells Pennsatucky that she has no friends. That gets her pushed into the dryer hard by Pennsatucky.

Healey seeks counseling. He used to like his job because he felt useful. Now that he’s older, he cares less or as seen too much to really make a difference. (Anyone else getting Tony Soprano flashbacks?) Healey’s very uncomfortable in every situation.

Bennett tells Daya she’s going to turn in Mendez for “raping” her (while he’s having sex with her, great time for this conversation). She’s having second thought about Mendez and doesn’t want to send an innocent man to prison.

Pennsatucky tells Healey she’s trying to turn a new leaf and doesn’t want to go back to SHU. He then tries some of his recent therapy techniques on the inmate. He’s going to be her new therapist, and talk to her once a week for counseling.

Bennett finds a smoked cigarette and goes on a rampage with a search of the bunks. “I’m in control. I’m in charge,” he yells. Even Mendez can’t see him like this, and grabs him up before he goes absolutely nuts. Mendez is so wrapped up in getting Bennett out, that he doesn’t suspect the box of tampons on the ground with the cigarettes tucked inside.

Bennett tells Caputo that Daya is pregnant and blames it on Mendez. Caputo seems pleased.

Suzanne gives Poussey box of “tampons.” She thinks LeAnn wants some cigarettes, but the white girl is looking for something stronger. Poussey wants Tastey to be her family, but Tastey has to remain loyal to Vee.

Tastey gives Nikki some stronger drugs than the cigarettes, and Poussey sees what’s being sold.

Piper’s first stop is home to Larry (who has cheated on her since leaving). Her brother tries to make the transition easier by yelling “no touching” when Larry goes to hug Piper. Just being a good big brother. Piper starts going through all her stuff and then asks the awkward question about Polly.

Larry covers with a story about “sleep-training” the baby as to why she can’t make the funeral. Piper is easily distracted by good coffee and upholstery. Piper has to stay at her parents due to furlough even though Larry tries to invite her to stay with him.

Piper wants to break some rules by going out drinking, but that will have to wait in order to greet guests at grandma’s wake. She then has to tell every person the definition of furlough.

Piper tries to have sex with Larry, thinking he hasn’t gotten any in a long time (oh poor girl, if you only knew). She locks them in the bathroom to get some, but Larry is having a little trouble. So he finds this is the best time to tell her (while she’s giving him head) to confess he cheated. He tells her it’s someone she knows but not the name. Larry wants this to be over, which Piper knows, because that doesn’t make him feel any less “shitty” for saying it. They still love each other, but the Larry-Piper relationship is over (and she lets him off the hook for coming to the funeral). 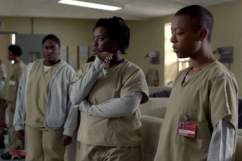