Disney and Lucasfilm signed Rian Johnson to write and direct Star Wars: VIII as well as write a treatment for Episode IX in the upcoming film trilogy, according to Deadline.

J.J. Abrams resurrected the George Lucas franchise for another three films in 2012 and will direct Episode VII, set to premiere on Dec. 18, 2015.

LOOPER – Official TrailerRelease Date: 28 September 2012 (United States) In the futuristic action thriller Looper, time travel will be invented – but it will be illegal and only available on the black market. When the mob wants to get rid of someone, they will send their target 30 years into the past where a “looper” – a…2012-06-28T23:00:16.000Z

Before his 2012 sci-fi, action hit Looper, Johnson had only directed two small films: his debut flick Brick in 2005 and The Brothers Bloom in 2008. Looper earned $176 million at the global box office and placed Johnson on studio short lists around Hollywood, according to The Wrap.

Star Wars going to @rianjohnson is fantastic. A huge talent who started with an indie and then made a fine studio film. See: Lucas, George.

Johnson acknowledged the great responsibility handed down to him by Disney and Lucasfilm on his Twitter. He tweeted a short clip from another space film The Right Stuff that expressed his sentiments. Watch it below:

After graduating from USC’s School of Cinematic Arts in 1996, Johnson directed three short films. He found success with his first feature-length film Brick in 2005. The movie won the Special Jury Prize for Originality of Vision at the Sundance Film Festival in 2005. Watch the trailer above.

He made the high-school set, noir mystery film for under $500,000. It was the director and Joseph Gordon-Levitt’s first project together. Johnson followed up Brick with The Brothers Bloom in 2008 that starred Rachel Weisz, Adrien Brody and Mark Ruffalo. Watch the trailer below.

The Brothers Bloom – TrailerAll their lives, brothers Stephen (Ruffalo) and Bloom (Brody) have perfected the fine art of the con. Now they're ready for one last spectacular score – luring Penelope (Weisz), an eccentric heiress, into an elaborate scheme that takes them around the world. Watch as writer/director Rian Johnson's (Brick) caper unravels in this brilliant, comedic tale.2013-05-09T07:41:33.000Z

Johnson helmed the Breaking Bad season five episode “Ozymandias,” which creator Vince Gilligan considers the best episode ever for the AMC series, according to TV Fanatic.

I tell ya, this next episode, I think for my money, is the best episode we ever had had or ever will have… I think people are going to have trouble breathing after this thing airs. It’s tremendous and it’s a great, great hour of television.

In journalist Robert K. Elder’s book The Film That Changed My Life, Johnson credits Woody Allen’s Annie Hall, “a film that broke so many rules in terms of film narrative,” as his inspiration to pursue a film career.

It moved me in a way that very few other films have moved me. That’s something that, I pray to God, if I am able to keep making movies, I can only hope, twenty years down the line maybe, I’ll be able to approach.

5. He Plays the Banjo and Sings Folk Music

When he’s not making films, Johnson makes music with his cousin Nathan Johnson. The two formed a folk band call The Preserves. The director is a folk singer and plays the banjo. 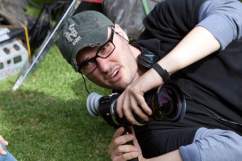