Barbara Robbin is the wife of British comedian Rik Mayall. Robbin and the iconic British comedian had been married since 1985. Mayall was found dead in the couple’s South London home on June 9 in a death that has been described as “mysterious.” In a 2012 interview, Mayall said about his relationship with Robbin, “I’m not bragging, but we’re in love.”

Here’s what you need to know about Mayall’s better half:

They met while Mayall was filming the sketch show A Kick Up the Eighties in 1981. At the time, Mayall was dating American writer Lise Mayer. According to Mayall, he and Robbin had an affair behind Mayer’s back until 1985, when the comedian eloped with Robbin to Barbados. Mayall decided to marry Robbin after Mayer became pregnant with his child. Mayer later suffered a miscarriage.

2. They Had 3 Kids Together

Mayall and Robbin had three children: Rosie, born in 1986, Sidney born in 1988, and Bonnie, born in 1995. Mayall credits his Rosie with forcing him to marry Robbin.

Speaking to the Daily Telegraph, Robbin spoke about Mayall’s death, “Maybe he had a fit, maybe it was his heart. We just don’t know.” He had been taking heavy medication since a quad bike accident in 1998.

Robbin was at Mayall’s side when he awoke from his coma in 1998. After his quad biking accident, the comedian was unconscious for five days. He said in an interview that she had gone into his room to say her final goodbyes. Mayall told The Daily Mirror:

So they say to Barbara, my wife, ‘he’s been dead for five days, it seems like a waste of time so if there’s no sign of life, we’ll unplug him in an hour’.

They left Barb with me and just before 5pm, the machine suddenly went beep, beep and she called the doctors and said, ‘look, he’s not dead’.

I don’t know if the doctors had said it really loudly to scare the s**t out of me but it worked.

Mayall later made a full recovery from his injuries. It was Robbin who gave Mayall the quad bike as a Christmas present in 1997.

4. Robbin Was a Makeup Artist

One of the detailed miniature dolls that Barbara Robbin creates. (Facebook)

She’s a former makeup artist who turned Mayall turn into the character, Kevin Turvey, in the sketch show where they met, A Kick Up the Eighties. According to her Facebook page, she graduated from the Glasgow School of Art in 1978. Also on her page, Robbin advertises her detailed miniature dolls.

5. She Raised Their Children Jewish

Rik Mayall pictured with his daughter, Bonnie, as a baby. (Facebook)

Robbin is originally from Scotland. She’s Jewish and Mayall said in a 2002 interview with ITV that the couple’s children were raised Jewish. 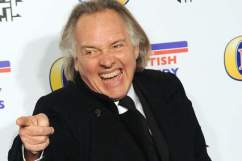