1. She Plays the Role of Riley Matthews

That awkward moment when a magazine publishes a photo that you don't like but your vogueing in it so like? pic.twitter.com/2KaL45DtOD

Riley Matthews is the star of Girl Meets World and the daughter of Boy Meets World couple Topanga and Cory Matthews. Viewers will follow Riley through her pre-teen life, alongside her best friend Maya Hart. If you’ve ever seen Boy Meets World, Maya will play a similar part to Cory’s long-time pal Shawn Hunter. Riley is 12 years old and in seventh grade.

Riley’s father and the protagonist of Boy Meets World. He has taken a job as a middle school history teacher, whose class will consist of his daughter and many of her friends. Even though he’s Riley’s dad, he sometimes acts like he’s Maya’s, too.

In addition to Girl Meets World, you may have seen Blanchard in films like Spy Kids: All the Time in the World in 4D, The Back-up Plan, and Little in Common. 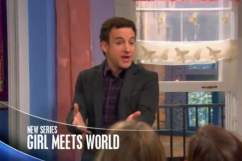 3. Her Best Friend on the Show Is Actually One of Her Good Friends in Real Life

Sabrina Carpenter plays the role of Maya, who happens to be Rowan Blanchard’s character’s best friend. In real life, this isn’t far from the truth as the two are good friends. Carpenter has quite a few roles under her belt, with appearances on Orange Is the New Black, Austin & Ally, and Sofia The First.

#TFIOS tonight! Matching in our fault in our stars blue because we can. @SabrinaAnnLynn pic.twitter.com/RZzp4lD3ek

The Matthews Fam announcing the #dodgers ? such a great night! Thank you @Dodgers ? https://t.co/MDVk44x5ZH

Danielle Fishel (Topanga) and Ben Savage (Cory) have become quite close with their on-screen daughter. Check out the adorable Vine of “the Matthews family” at a Dodgers game together.

“@daniellefishel: Just a regular Sunday. pic.twitter.com/TFIeF8o2tz” I love you. And miss you. 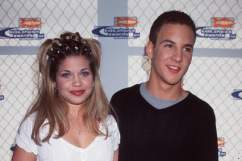 5. In the First Episode of Girl Meets World, Rowan’s Character Gets Caught Sneaking Out of the House

Riley and Maya team up to sneak out of Riley’s bedroom and get on the subway, but their plan doesn’t go the way they thought. They still take the subway and meet a boy named Lucas, but end up being late for history class, and discover their teacher is Riley’s father, Cory. Lucas walks in and introduces himself as from Austin, Texas. Maya starts a homework rebellion, and Riley joins her, causing issues with her dad Cory as a result.