Sean Vann traveled to Siberia almost 18 years ago to work in the Russian timber industry. In Discovery’s new docuseries Siberian Cut Vann recruits four more American loggers to help him start his own logging company in the Russian forest.

Vann spoke with Heavy about his logging career between the Cold War nations and the risks he’s taking starting his own company.

1. Vann Searches for the American Dream in Russia

Environmental protection laws restricted much of the timber industry in the United States by the mid-1990s. New logging companies like Vann’s had to close and their employees had to find new opportunities, such as in the oil industry. Vann found his in Siberia, thanks to a comment he heard from an Oregon man.

His family in Kalispell, Mo. has grown used to Vann being away for long periods of time.

I was doing this long before my kids were born so they’ve never had to get used to me being one month on and one month off. Loggers’ wives are used to the schedule

2. Vann Had to Work His Employees Around the Planting Season

The people of the logging towns in Siberia live off the land. Their potato planting season is important that the planting and harvest days are national holidays. Vann had to take this into account when he scheduled his men to work.

The villages are not developing and shrinking as the youth move to the cities to find jobs. These are tight knit but rough and tumble towns that need to take care of their families.

3. Vann Wasn’t the Only Foreigner in the Logging Towns

Vann has put in enough time in Russia to learn the language, but he found some English speakers to converse with every so often.

Last time there I worked with a guy from Sweden. Also, the forestry is attached to the saw mill where some more foreigner work. After hours I’ll meet up with them.

Vann and his American loggers spent most of their time at the camps, but made some occasional trips into town. “A couple times a month we’d go into the city to get a pizza and a cold beer,” Vann said.

As a second generation American logger, Vann remembers the old logging towns of America in the 1960s and 1970s. “The logging towns in Russia take me back to those during the ’70s in America,” Vann said.

Vann and the Russian loggers have an expansive forest to cut timber from, a commodity that’s not available to Americans after the United States Forest Service shot down logging in national forests. If the Russians invest in their infrastructure and build better roads, Vann said the loggers can reach out to almost infinity to cut their timber.

Vann’s interactions with the locals was much better for him than his fellow Americans, at least initially. The Russians have their suspicions and issue of mistrust in the first few weeks, according to Vann, who the locals consider three-quarters Russian because of his extensive time spent in the country.

“We’re all humans with the same desires and needs,” Vann said. 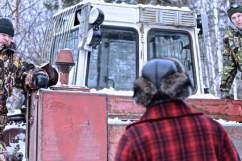